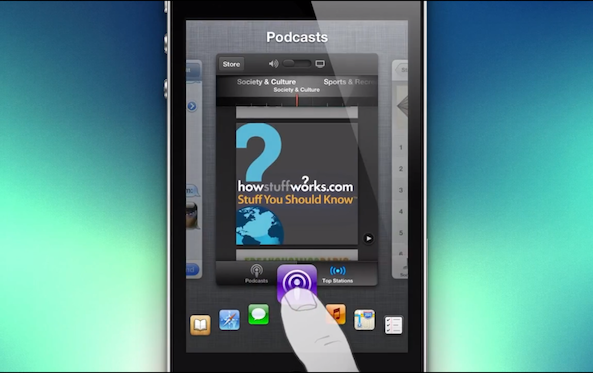 We’re always in search of ways that iOS can be improved, which is why you’ll see a number of iOS concepts and ideas on iDB that are aimed at making Apple’s mobile operating system better. Take this recent one on multitasking, for example. It’s beautiful.

But not all concepts attempt to make iOS better-looking—some try to make it more functional. And that’s the idea behind today’s concept. It takes the current app switcher, and makes it more efficient by allowing faster access to more of your suspended apps…

The following video was posted to The Verge’s Apple Core forum, by Sentry, under the title ‘Re-Thinking App Switching.’

If the name Sentry sounds familiar—and it should—that’s because he is the designer behind the popular jailbreak tweak Auxo, and many iOS-flavored concepts. And he manages to impress us yet again with this one for a revamped multitasking solution.

Of course, there’s nothing really special about the ‘slide-up from the bottom of the screen’ action that reveals the app-switcher—there are already several jailbreak tweaks that do that. But what is cool is the row that lets you quickly switch between apps.

Think about it. As it stands, to switch to an app that you haven’t used in a while, you have to double tap the Home button and scroll through x amount of rows—sets of 4 per row—to access it. In this method, there’s 7-8 apps per row and the UI is much more fluid.

I really like this concept, and as usual, my fingers are crossed that a jailbreak dev sees it. Of course, what I’m really hoping is that Apple is seeing all of this great stuff these designers are putting out there, and getting some inspiration for future iOS versions.

The next major release of iOS, presumably iOS 7, is expected to be introduced in a few months at Apple’s WWDC event. And while we probably won’t see any significant redesigns in the aging platform, word has it that we could see some subtle design changes.

Anyway, what do you think of Sentry’s new concept?