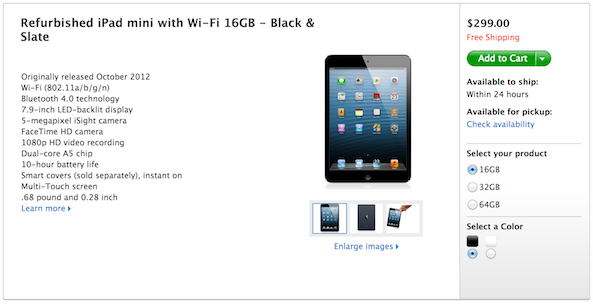 Folks thinking about buying an iPad mini, but just can’t get over the tablet’s exorbitant $330+ price tag, will be happy to hear that you can now get one for less than $300 from Apple’s web store.

The company began offering a handful of refurbished iPad mini models, alongside fourth-gen iPads, earlier this month. And they’ve just added black and white 16GB Wi-Fi-only models to the mix…

As noted by 9to5Mac, Apple added its entry-level iPad mini to its refurbished inventory online this weekend. The discount is only 9%, good for just $30 off, but it still gets you a mini for under $300.

This brings the 7.9-inch device in line with Apple’s cheapest tablet—the 16GB Wi-Fi iPad 2. Though it’s worth noting that it sells new iPad 2s at that price, where as these minis have been recertified.

Of course, you may want to hold out on buying a mini at all, as a new one with a Retina display is expected in the next few months. But if you’re interested, you better act fast. These $299 units won’t last long.