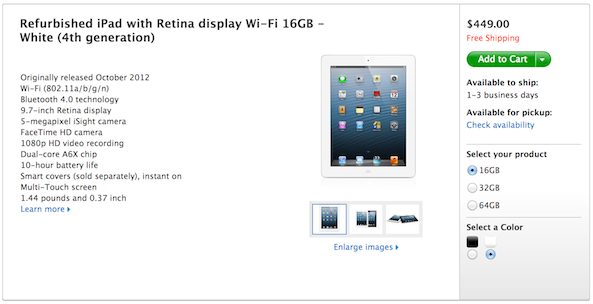 Good news today for folks looking to score a fourth gen iPad, or iPad mini, on the cheap. Apple has, for the first time, listed refurbished units of both of the tablets for sale on its website.

The discounts aren’t significant—up to 9% off of minis, and 10% off of 4th-generation iPads, depending on the configuration—but they’re good enough to knock $50 off of some models…

First noted by MacRumors, the two tablet models surfaced in Apple’s webstore this morning in various types and sizes. Unfortunately, the selection seems pretty limited at this point.

Some of the current offerings:

For a little context, Apple rarely discounts its newer devices outside of the holiday season. So anytime deals like this pop up—yes even on refurbished models—the inventory doesn’t usually last long.

It’s also worth noting that Apple’s refurbished units are highly regarded in the world of consumer electronics. They come with brand new batteries and backs, and the same one-year Apple warranty.