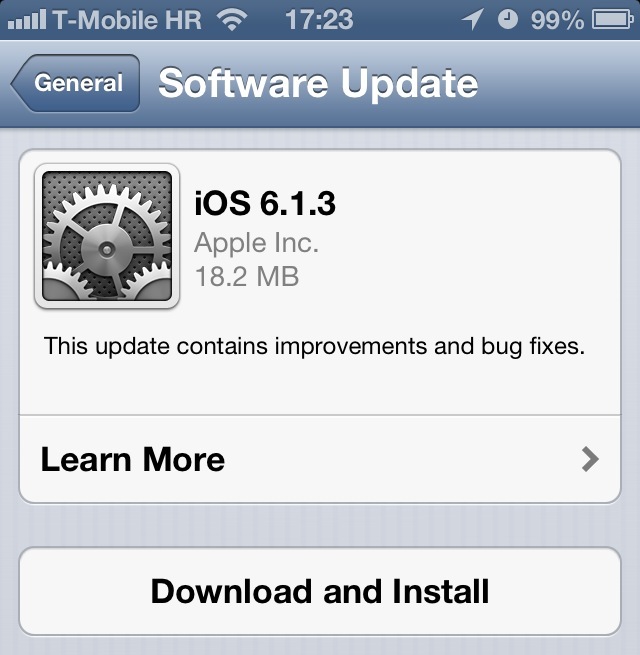 Apple has just issued iOS 6.1.3 (build 10B329), an incremental update to its mobile operating system powering iPhones, iPads and iPods. This particular update brings fixes to the widely reported Lock screen vulnerability, first discovered a month ago, which lets people with access to your iPhone, iPad or iPod touch to easily bypass your passcode and get to your personal information on the device.

Today’s firmware also contains Maps improvements for Japan. If you’re jailbroken, you’ll want to stay away from this update until we collect more information…

According to release notes accompanying the 18.2MB download, this update contains the following improvements and bug fixes:

You’ll recall that Apple earlier this month has delivered a bunch of much-needed fixes and improvements for its iOS Maps application in Japan via an over-the-air update to non-iOS 6.1.3-beta devices.

To apply this update, go to General > Software Update in your iOS Settings or connect your device to iTunes.

The previous update, iOS 6.1.2, fixed an Exchange calendar bug that could result in increased network activity and reduced battery life.

Per PlanetBeing, iOS 6.1.3 might fix some of the vulnerabilities needed to make the latest Evasi0n jailbreak work so you should hold off updating your jailbroken devices for now. We’ll keep you posted once we find out more.

In the meantime, you can download iOS 6.1.3 directly from here.

Let us know in the comments if you spot other changes worth sharing.