It’s fairly rare when the mastermind behind Cydia decides to create his own jailbreak tweak, but when he does, the masses take note. That’s exactly what happened when Cyueue was dropped in Cydia recently. Cyueue is a new jailbreak tweak from Saurik, which adds a new queueing option in the stock Music app.

If you’re throwing a house party, then Cyueue is the perfect answer for you. It allows you to keep the current song playing, while still queueing up the records you’d like to hear next. Take a look inside to see how it works.

As you can see, with Cyueue installed, you get new options to Play Now, Play Next, or Play Last. Play Now works just like the Music app does without Cyueue installed, in that it will immediately stop playing the current song, and go to the song you want to play. Play Next, will queue your song up to play right after the current song is finished. Play Last will place the song you select at the end of your Queue. Once you get used to the way Cyueue works, you can use double tap gestures to quickly enable the Play Now, Play Next, or Play List items.

As you might guess, Cyueue uses a playlist to manage its queue, and this playlist can be seen by venturing over to the Playlist section of the Music app. The difference with the Cyueue playlist when compared to other playlists, is that the Cyueue playlist is totally dynamic. It clears itself out each time you start a new Music listening section; that way, you don’t have old songs from your prior listening session in the same playlist. 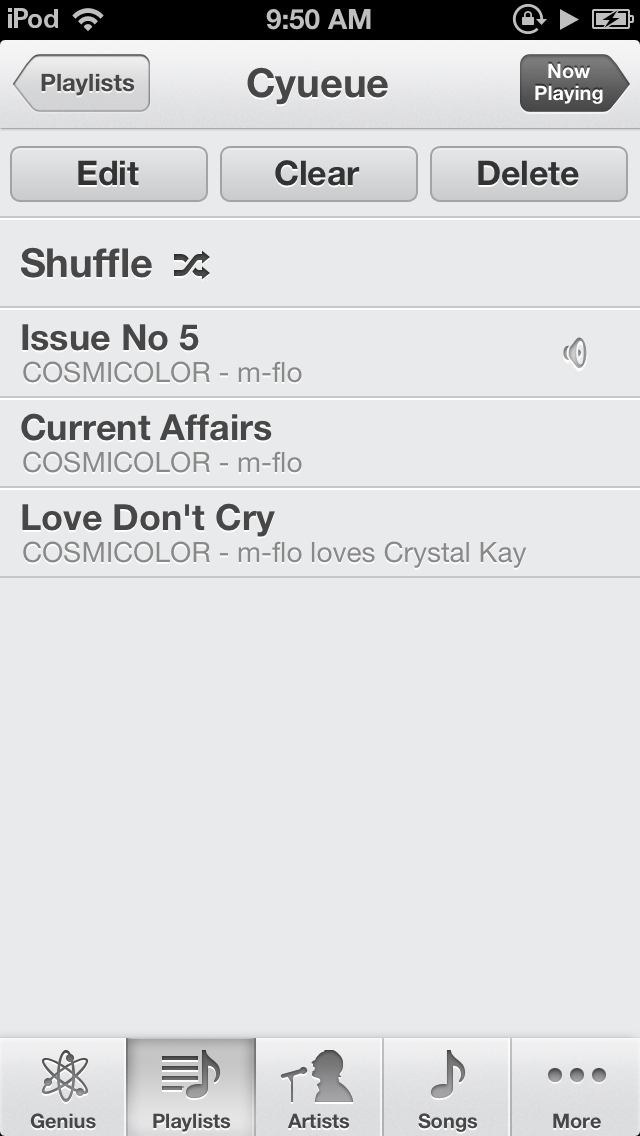 Cyueue uses a dynamic playlist to manage your queue

If you’re ever having a party, or even a small social gathering, then Cyueue can help in a major way when it comes to keeping folks entertained. No longer will you have to suffer through the jarring experience of switching to a new song while in the middle of another song. Cyueue can make you a better MC.

Why did Saurik decide to take on this project? He answers via the tweak’s Cydia description:

In April of 2012, iOS 5.1 had been out over a month with no jailbreak in sight. It is at times like this when there is suddenly time to “build new things”.

Usually, I spend that time building new developer tools or working on new features of the Cydia payment backend system, but I got the itch to Substrate.

After doing some research into “what would users actually want to see”, I came across a pattern of users having issues with the iPod/Music application.

In fact, every few weeks, people had been asking for the same extension: a way to queue songs up without having to stop your currently playing song.

Of course, I didn’t actually know much about the iPod/Music app’s internals, so I needed to spend some time first improving my development tools ;P (dusting off my old “Aspective-C”).

Fate, however, was not kind to this project: just before I was able to get it all put together, my time was stolen by the release of Rocky Racoon, the iOS 5.1.1 untether exploit; pulled out of the moment, I never managed to return.

To this day, people ask for this very feature, and it has been burning on my mind (nay, my soul) that I had never released the project: I couldn’t stand it.

Meanwhile, the demand behind this concept has only increased: instead of once every few weeks, I see this idea come up a few times every week.

Of course, in the world of iOS hacks, code often rots; but I found my old designs and prototypes: amazingly, everything was still working on iOS 6.1.

Finishing this project and getting it out was thereby cathartic: extracting a dangling thread from my mind that was bothering me every day for a year.

Some interesting insight into what makes Saurik tick. Whatever your opinions about him are, you certainly can’t deny the guy’s passion for this stuff.

There are no options to configure, no app icons, etc. Just install the tweak from Cydia’s default repo, and you’re good to go. Cyueue is $2.49 on Cydia. Not only is it an excellent tweak, it’s a great way to show your support for Saurik, considering all of the hard work he has put in over the years. Let me know what you think in the comments section.