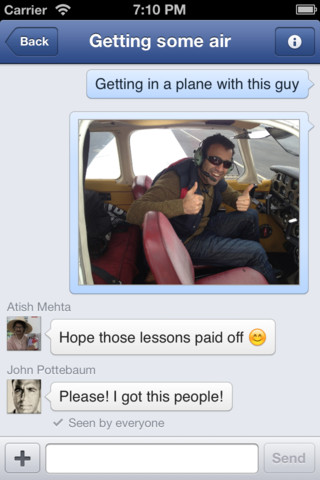 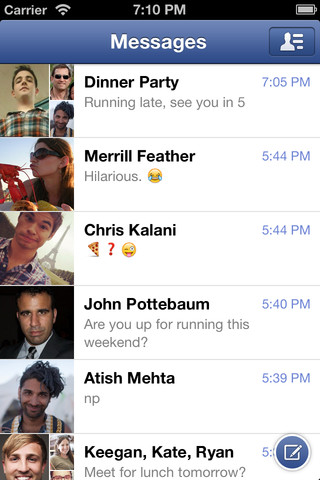 Facebook has just updated its Messenger iOS app with a few new features and “other improvements and bug fixes.” The new Facebook Messenger version 2.3 is all about enhancements to group conversations, says the social networking behemoth. It contains one feature I’ve been yearning for ever since the program’s debut on the iPhone: you can finally name a group by tapping on the top of your active conversation.

And just like Facebook’s main iOS client (and a growing number of other third-party apps for the Apple platform, for that matter), you can now get to your active group conversations by swipe left, which reveals them in your sidebar. I’ve included a few screenies along with other nice tweaks right after the break… 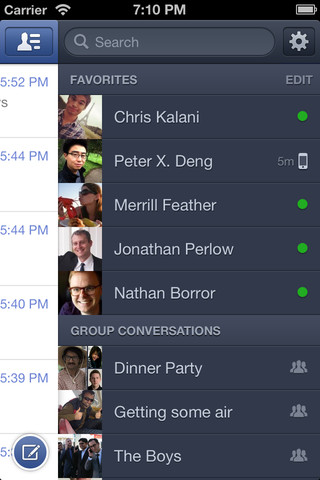 Sidebar items now include your group conversations as well.

As noted by Mark Gurman, Messenger now comes with a brand spanking new icon reminiscent of the graphics used in beta versions prior to the app’s initial release.

This is what the new icon looks like on my Home screen.

However, as of this writing the old icon still shows up in iTunes. Perhaps Facebook inadvertently included icon graphics for app designers in this Messenger release?

Another note to Facebook: how about replacing those 320×480 iTunes screenshots with taller iPhone 5 versions?

Unfortunately – and this is becoming annoying already – the app still doesn’t support iPads natively. If you’re jailbroken, Jeff has a handy step-by-step guide on unlocking the iPad interface.

Free VoIP calls via Facebook Messenger went live last month for users in Canada and United States, but there is no indication when this feature might get rolled out in other markets.