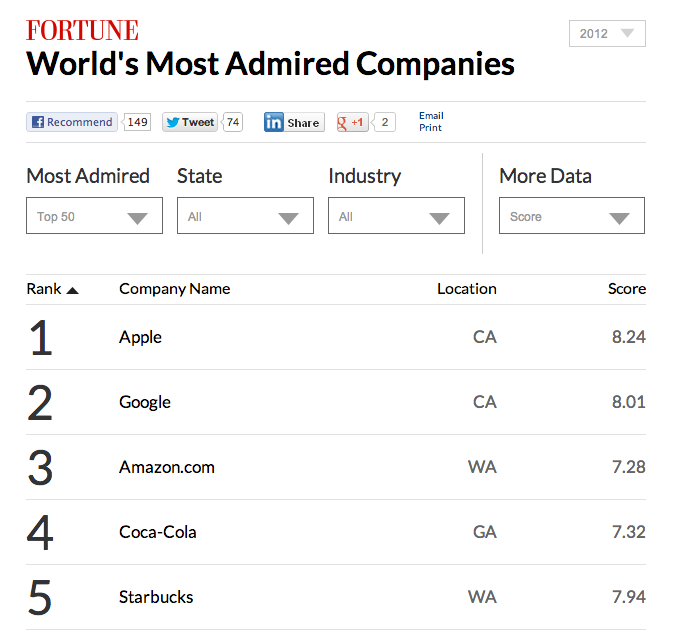 For the sixth year in a row, Apple was named the most-admired company in the world. In spite of a stock free fall and the Apple Maps gaffe, the iPhone maker topped rivals Google and Amazon, Fortune announced Thursday.

Described as a “financial juggernaut” which became the most profitable company on the globe, Apple was named the over-all most admired firm while also topping the list as the most admired technology firm of 2013…

“Apple has had a rough time lately with its stock price in a free fall and the widely publicized failure of its Maps feature,” according to Fortune.

However, it remains a financial juggernaut, posting $13 billion in net income last quarter, making it the most profitable company in the world during that period. The company has its fanatical customer base, and it still refuses to compete on price, making the iconic iPhone and iPad products that are still widely seen as prestige devices. Competition may be stiff, but so far it remains behind: In Q4 2012, the iPhone 5 was the world’s best selling smartphone, followed in second place by the iPhone 4S.

Along with continuing to be the most-wanted workplace, No. 2 Google’s most admired qualities this year focused on its battle with Apple.

Number 3 Amazon.com “stands to become the largest beneficiary of the e-commerce industry boom,” according to today’s rankings. The Internet retailer was also cited for challenging Apple and Google in tablet sales, as well as its video streaming service going up against Netflix.

Microsoft, maker of the Surface Pro tablet and Windows 8 Phone, lands in 17th place. The company “is facing an uphill battle, as consumers are slow to adopt Windows 8,” writes Fortune. Microsoft “still has a few tricks up its sleeve with ownership of the Xbox, Skype” and cloud-based services, according to the publication.

Samsung, maker of the Android-based Galaxy S smartphone family and tablets – both strong challengers to Apple’s iPhone and iPad – was ranked 35 out of 50. Meanwhile, social networking giant Facebook landed in the cellar, ranking 48. Twitter, which increasingly challenges Facebook, did not make this year’s Fortune list.