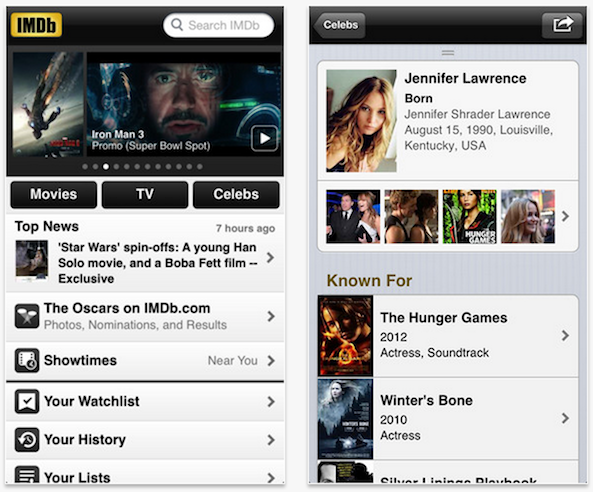 Amazon-owned IMDb issued a nice little update for its iOS app last night. The update, which brings the app to version 3.1, adds a handful of new features, including a new Oscar section—just in time for the Award show this Sunday.

Also on the list of additions are new direct links for titles that can be viewed on Amazon’s Instant Video service (if the app is installed), a new ‘Recommendations’ facet that will offer up suggested movie/TV show content, and more…

Here’s the app’s full change log, as listed in the App Store:

The new Oscar section is nice. Right now it offers up a list, and photos, of all of the Oscar nominees, and how they’ve faired thus far in the Awards season. But it will really shine on Sunday night, providing exclusive content from the ceremony.

Amazon Prime members will really like the link feature though. Let’s say you look up a movie in IMDb, and discover an actor you like. If any of their films are on Instant Video, tapping their links will launch them in the Instant Video app.

Even if these two new features don’t appeal to you, you’ll still obviously want to grab the update for the bug fixes and improvements. If you don’t already have it, you can find iMDB for both the iPhone and the iPad in the App Store for free.