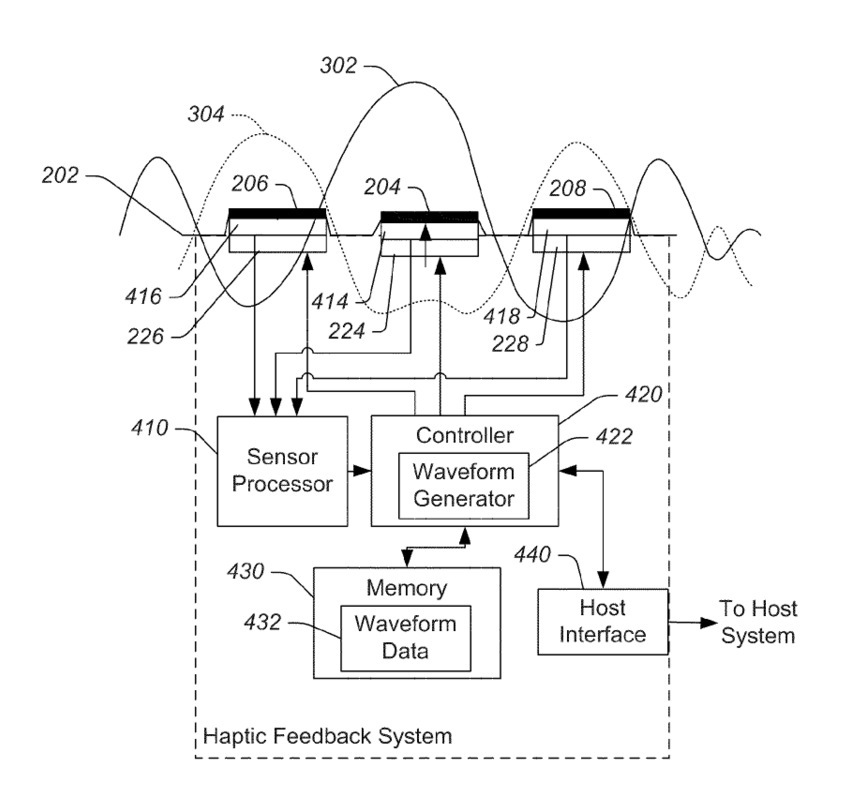 The use of haptic feedback in smartphones is increasingly commonplace, however until now Apple has shied away from using the technology in its multitouch devices, such as the iPhone and iPad. However, the prospect is now open for a multitouch keyboard that provides consumers a tactile response, according to an Apple patent grant by the U.S. Patent and Trademark Office.

Apple first applied a filing for the invention back in 2009 to solve the problem of multiple haptic signals interfering with each other, thereby confusing users. Apple outlined a way to localize the haptic feedback by using secondary sensors which cancel-out the confusing signals. In this way, when an iPhone owner hits the ‘L’ key, he won’t also receive a vibration under the ‘K’ key of a virtual keyboard…

According to AppleInsider, the patent “uses destructive interference created at various points away from the originating, and wanted, vibration to obscure or otherwise cancel the propagating ‘vibratory crosstalk.'”

Today’s patent award is just the latest indication Apple is considering a wide range of technology that redefines the shape of computing, as well as the growing use of smartphones in everyday life.

One patent aims to improve iPhone photography by employing a scoring system to reduce the number of shots wasted by blurry images. Another technology revealed would create a micro slot antenna enabling Apple’s designers to produce even thinner and more sleeker handsets.

As we see more large companies adopting the iPhone, Apple has filed for a patent to update its password system protecting mobile data. Rather than simple text-based passcodes, the company envisions passwords linked to photos – even the voiceprint of handset owners.

Finally, during talk of Apple possibly reinventing the wristwatch with the iWatch came word that the company wants to patent technology for a full-body computer.

As always, evidence of a patent does not mean Apple is preparing to introduce such technology in its products.

The goal could be to refine existing technology, opening the way for potentially lucrative licensing fees or possibly bolster its quiver of courtroom arguments should a patent-infringement lawsuit erupt.