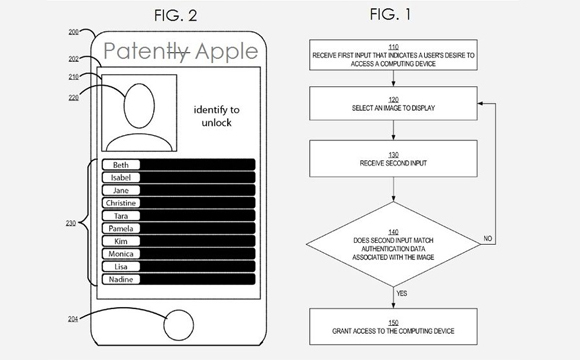 Good news for those of you who have a strong disdain for remembering and entering in passwords. It looks like Apple is again exploring alternatives to the traditional text and number-based authentication method.

An interesting patent application fro the Cupertino company has recently surfaced that depicts an iPhone being unlocked by a user verbally (or using touch-based input) identifying a person, pet or object in a photo…

PatentlyApple was the first to report on the patent application, which was published by the United States Patent and Trademark Office last week. And they provide a nice overview of what the invention is meant to do.

And this is just one example of how the image-based authentication method could work. For further security, users could opt to identify two or more objects in a single photograph, or multiple objects in multiple photos.

Apple has shown a lot of interest in password alternatives over the years. Last September, one of its patent applications involving facial recognition popped up. And shortly after that, we saw one on fingerprint scanning.

But as you know, none of this guarantees that we’ll be free from passwords in iOS anytime soon. But the fact that Apple is working on not one, but multiple alternatives is a very good sign. I give it another two or three years.