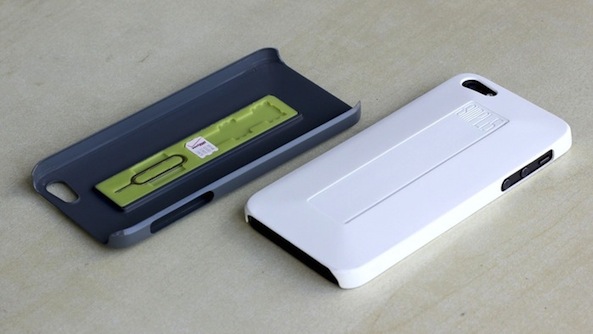 Do you travel abroad often? Maybe it’s for business, or pleasure, or both. And if so, do you use the same unlocked iPhone everywhere you go? If you answered yes, to either question, you might want to check out the SIMPLcase.

The SIMPLcase is an ultra-slim iPhone 5 case—3mm in the center, 1mm at the edges—with a couple of cool features. In addition to protecting your phone, it can also store extra SIM cards, has a SIM tray eject tool, and more…

First, let’s talk about SIM card storage. The case has cutout slots for 3 additional SIM cards. The first run of the case will be for the iPhone 5, so that means Nano SIMs. But the developers say that an iPhone 4/4S case is in the works.

Next on the list is a built-in SIM tray eject tool. It looks like you’d expect it to, and should really come in handy as you switch between SIMs. And finally, the case can be used as a kickstand, by placing a credit card in its rear slit.

This is yet another great example of why Kickstarter is what it is. These guys had a need for something, it didn’t exist, so they created it. And while I don’t personally need a multi-SIM card holding case, I’m sure there’s plenty that do.

What do you think of the SIMPLcase?