Chinese New Year, also known as Lunar New Year, is the most important of the traditional Chinese holidays. Ahead of the upcoming festivities which come with a seemingly endless stream of colorful lanterns being released in the sky, Cut the Rope maker Zeptolab and UK publisher Chillingo have issued a content update which brings a brand new Lantern box full of – you guessed right – floating paper lanterns. With the 25 new levels, Cut the Rope now has a total of 350 levels spread across fourteen different boxes. Not bad for a 99-cent game…

In celebration of Chinese New Year, the NEW Lantern Box has arrived to Cut the Rope with 25 levels and a new gameplay element: floating paper lanterns.

You can find the new Lantern Box in the Season 3 shelf, along with DJ Box, the Spooky Box and the Steam Box levels. 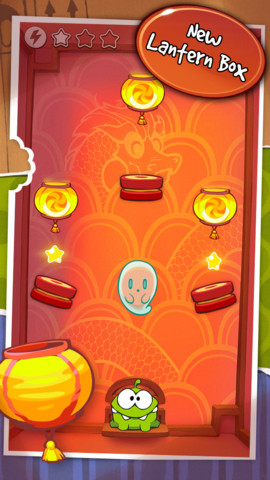 Cut the Rope will run you 99 cents for the iPhone and iPod touch version.

A high-definition build for iPads is a $4 value (you can also pick up Cut the Rope for Android).