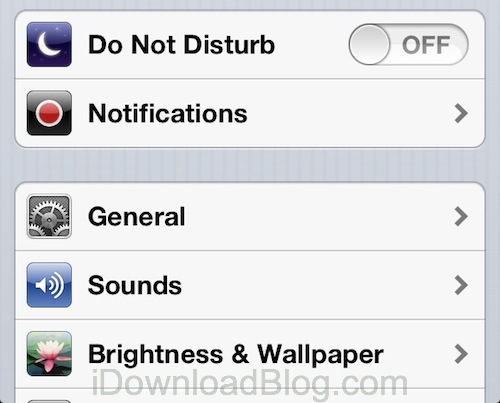 Apple has just acknowledged that a time-related bug which on New Year’s Day caused the Do Not Disturb feature to fail to disable itself despite being outside its scheduled time. The iPhone maker writes in a support document it just published that the bug will automatically fix itself by next Monday, January 7, 2013. The company did not say whether it planned on fixing the glitch once and for all – we don’t want to miss our notifications on the next New Year’s Day…

Do Not Disturb scheduling feature will resume normal functionality after January 7, 2013. Before this date, you should manually turn the Do Not Disturb feature on or off.

Apple acknowledges that after January 1, 2013, the Do Not Disturb mode stays on past its scheduled end time.

Apple has confirmed the bug in Do Not Disturb (on the iPhone): it won’t turn off on schedule. It gets fixed next week. j.mp/10P1S0k

At first, we thought it was a one-day glitch.

Subsequently, however, we have received multiple tips from readers confirming they continue to have this issue today.

It’s easy to check if your device is exhibiting the problem: just turn the scheduling feature off and then back on. Should the main toggle in Settings automatically enable the Do Not Disturb mode even though it’s past its scheduled time, you too have a problem.

To turn off the scheduling feature, tap Settings > Notifications > Do Not Disturb and switch Scheduled to Off.

Anyways, not fixing the glitch with an incremental iOS update is bad marketing.

How about actually squashing these pesky time-related bugs once and for all instead of letting them fix themselves? And what magic actually makes the issue disappear come next Monday? Another bug, perhaps?