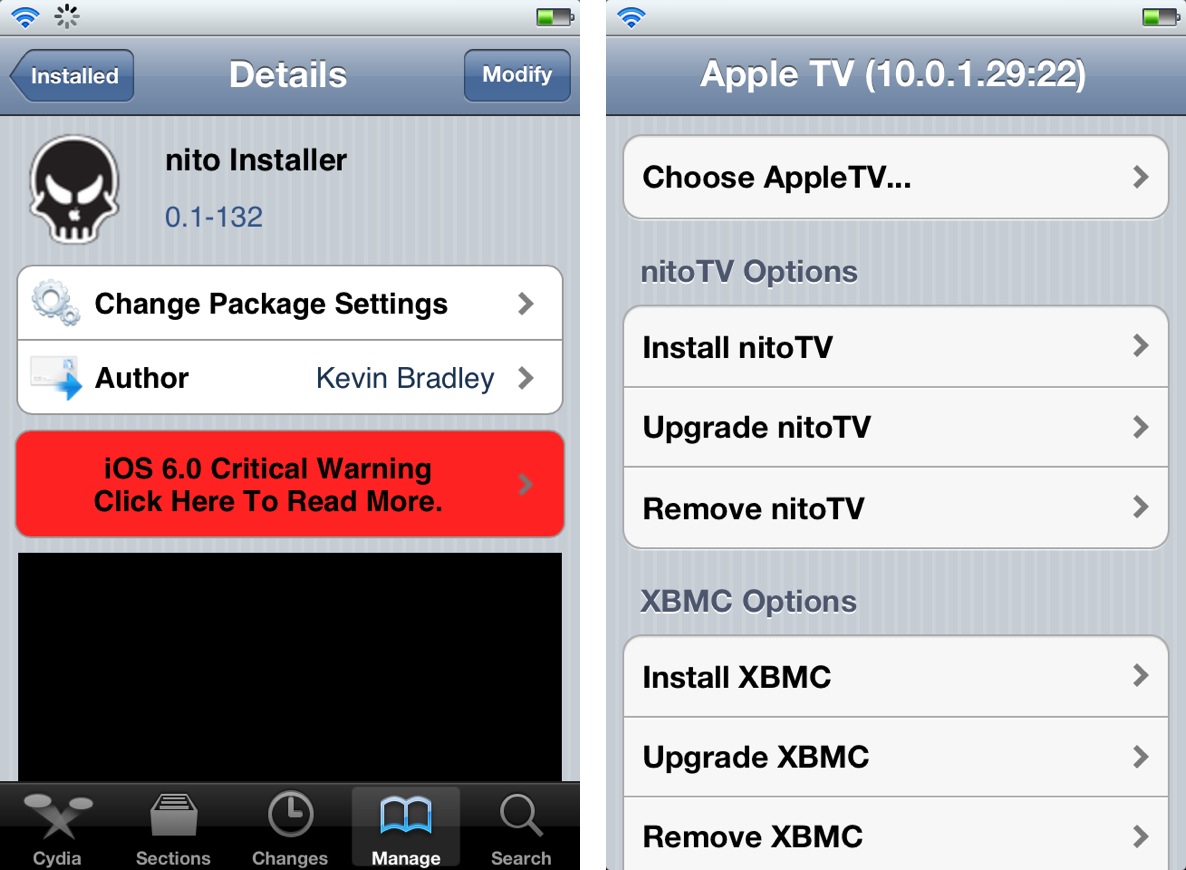 Thanks to the folks over at FireCore, both jailbreaking and installing useful jailbreak apps on an Apple TV 2 is about as easy as it gets. FireCore’s jailbreak tool — Seas0npass — is incredibly simple, and it’s free.

Likewise, FireCore’s application package — aTV Flash (black) — is extremely simple as well, though there is a charge associated with using it. Pretty much everything that you can install using aTV flash (black) can be accomplished on your own with a bit of know how, but its simplicity makes the package worth the money.

Now Kevin Bradley, better known in hacking circles as nitoTV, has created his own easy to use installer, appropriately called, nito Installer. Unlike aTV flash (black), his version is free and runs directly on an iOS device like the iPhone or iPad.

Want to see how it works? Take a look inside as we take nito Installer for a spin…

For the record, let me just say that I’ve been corrected on the pronunciation of “nito”. It is pronounced “neat-o”, and I feel a bit dumb that I’ve been pronouncing it incorrectly all of this time. I apologize for that.

And that makes sense, because nito Installer is indeed neat. It works wonderfully well, and is something you should definitely consider using if you’re at all into the Apple TV jailbreak scene.

Upon launching nito Installer, you’ll first be prompted to select an AppleTV. The installer will pick up any AppleTVs residing on the same Wifi network, so you’ll obviously need to be connected to Wifi in order to use it.

Once you’ve selected a jailbroken Apple TV, then the fun begins. You’re given options to install nitoTV and/or XBMC. Literally, all you do is tap install nitoTV, and the installation process begins and finishes on its own.

Although you’re met with a progress wheel on the iPhone, the fact that anything is being loaded to your Apple TV isn’t very conspicuous. I wish that the installer would force some sort of notification to display on the Apple TV side of things so that we knew that the two devices were actually communicating. Eventually, though, your Apple TV will reboot, and you’ll be met with an icon for the respective package that you decided to install.

Another nice thing about nito Installer is that you can upgrade, transfer addons, and remove packages all from the convenience of the installer running on your iPhone or iPad. There are even advanced options included for changing your SSH password, or for relaunching or rebooting the Apple TV. Lastly, if your iPhone or iPad is feeling left out, you can install XBMC on it as well.

Nito Installer is a universal app, meaning that it features layouts appropriate for both the iPhone and the bigger screen on the iPad. Best of all, it’s a totally free download on Cydia’s BigBoss repo. Though it may not be as pretty, or pack quite as many features, if you’ve been looking for a free alternative to FireCore’s aTV flash black, then you’ve found what you’ve been looking for.

Have you tried nito Installer? What did you think about it?