How is the 7.9-inch iPad mini doing in the war amongst small tablets? Pretty well, according to one company. During November, the number of ads displayed on the mini grew 28 percent each day. By comparison, mobile ads on Amazon’s Kindle Fire tablet rose 19 percent per day during November.

According to Millennial Media, the iPad mini is both a “game changer” and a holiday “must-have gift.” Perhaps most-telling  is that minis purchased in November as likely holiday gifts didn’t stay under wraps for long…

The firm’s Matt Gillis said in a Monday blog post:

While we expect a massive amount of iPad minis to be received as gifts (and not opened until the end of the month), it appears that many folks couldn’t wait for the holidays to come and have rapidly embraced the newly sized iPad.

Explaining the iPad mini’s average daily growth in impressions of 28 percent versus 19 percent for the Kindle Fire, Matt wrote that “by our math it looks like Apple could have itself another massive holiday season”. 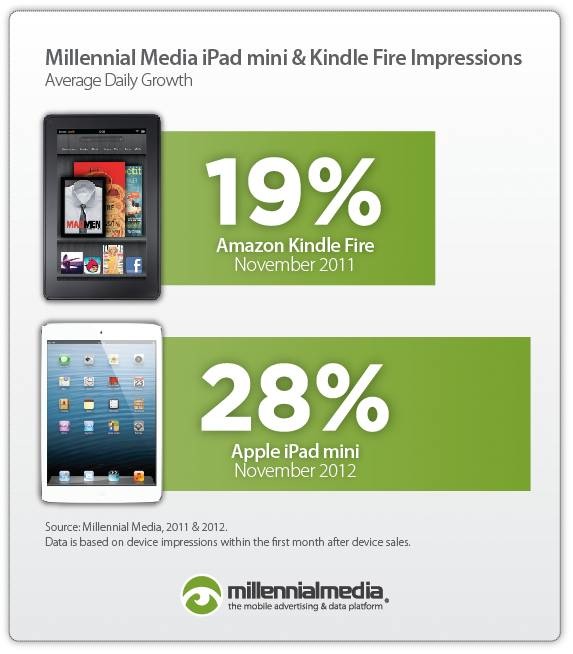 It certainly doesn’t hurt that it’s now getting easier to find an iPad mini on store shelves as shipping times recently dropped to one week.

Of note, earlier today Jefferies analyst predicted an iPad mini with Retina display will appear at the same time of an updated iPad 4 and the iPhone 5S around June or July of 2013.