Internet analytics company comScore has released a new report on the US mobile and smartphone marketshare landscape. And according to their data, Samsung is still the top mobile OEM in the country. But Apple is gaining ground, and has just passed up LG for second place…

Surveying over 30,000 mobile subscribers, comScore has concluded that Samsung still owns the largest piece of the mobile pie — that’s smartphones and non-smartphones. As you can see in the chart below, 26.3% of those polled own a Samsung handset, up from 25% in July. 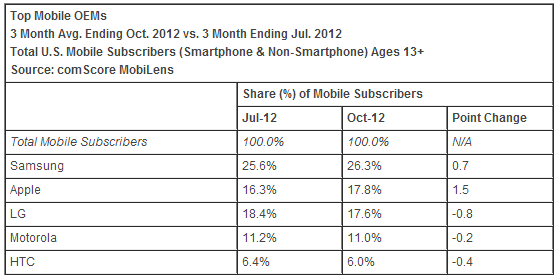 Apple moved into second place this time around, passing LG for the first time ever in mobile marketshare. Likely on the back of its iPhone 5 release, the Cupertino company jumped from 16.3% to 17.8%, while LG fell from 18.4% to 17.6% — good enough for the number three spot.

Other than that there weren’t many surprises in comScore’s findings. Motorola and HTC pulled up the rear with 11% and 6% of mobile marketshare, respectively. And Google’s Android OS remains the top smartphone platform, with 53.6% of the market. But iOS is on the come-up.

We’re right in the middle of the all-important holiday quarter, and though Apple’s iPhones appear to be selling well, LG did just release a Nexus handset that continues to sell-out. It’ll be interesting to take a look at these numbers in a few months after all of the dust settles.