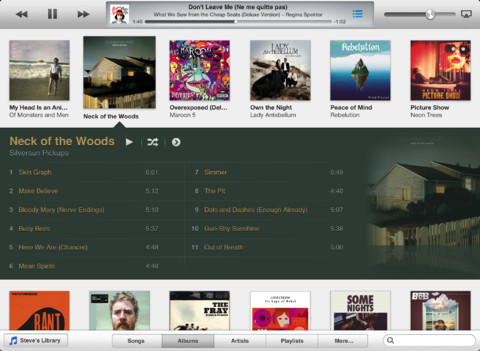 Following the official release of iTunes 11 for Mac and Windows and an incremental Apple TV firmware update, today’s update bonanza continues with the release of a minor update to Apple’s Remote iOS app. It now plays nice with iTunes 11, of course, and includes a redesigned interface on iPad tablets that takes design cues from the new iTunes, just as the previous version was reminiscent of desktop iTunes. As for iTunes 11 support, the updated Remote app now includes overhauled library views, an expanded view for your media, improved search results, the new UpNext feature and more…

Oh, and Remote now comes with a slightly improved icon, just like iTunes 11.

And this is what the iPad interface looks like, via Patrick McCarron. 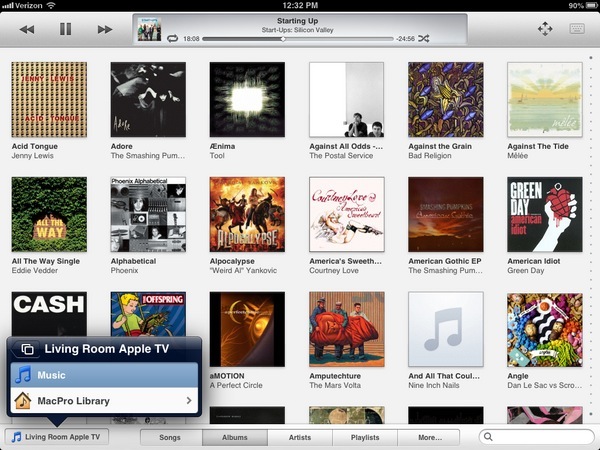 Remote is designed to be in perfect sync with the new iTunes, Apple writes.

It is simpler, easier, and gives you new ways to browse your library and see upcoming songs with Up Next. With just a few taps on your iPad, iPhone or iPod touch, you can add new songs to hear them next from iTunes on a Mac or PC, or an Apple TV.

Here are all the key features.

• Control iTunes and Apple TV from anywhere in your home
• A simplified look with new ways to browse your library
• See upcoming songs with Up Next
• See all songs in an album with Expanded view on an iPad
• Add new songs to hear them next and then automatically continue where you left off
• Browse, listen to, and control your iTunes Match library on Apple TV
• Pause, rewind, fast-forward, shuffle, and adjust the volume from your iPhone, iPad, or iPod touch
• View album, movie, and TV show artwork
• Create and update iTunes playlists, including Genius playlists
• Search your entire iTunes library
• Control iTunes to send music to AirPlay speakers
• Control the volume on each speaker independently
• Use simple gestures to control Apple TV
• Enter text with the keyboard
• Control shared libraries on iTunes and the new Apple TV

If you haven’t yet, check out Remote on your iPhone, iPod touch, iPad or iPad mini. I’m not sure why Apple won’t include its feature as standard on iOS, but I cannot live without this program anymore.

Even if your setup consists of only a Mac/PC notebook and an iPhone, there’s something inherently fun in being able to control iTunes on your desktop from across the room.

I also own iPads and an Apple TV hooked up to a plasma TV so Remote becomes indispensable for navigating my main iTunes library and stream whatever content I feel like to whatever device I happen to be using.

Did you find the Remote app useful?