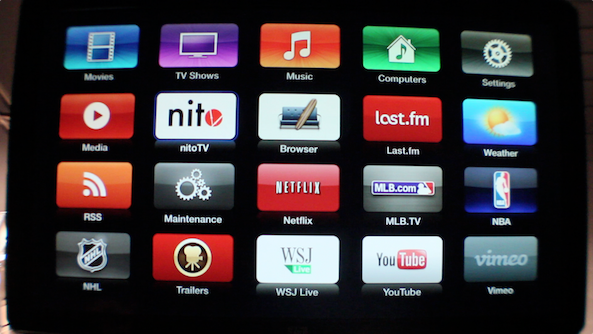 Hot on the heels of posting the eagerly anticipated iTunes 11, a major revamp of the jukebox app focused on iCloud integration and cleaner navigation, Apple of California also started pushing an incremental update to the Apple TV, its $99 set-top box. The iOS 5.1.1 firmware number with a build number of 10A831 is now available as a Software Update for both the second and third-generation Apple TV. To apply it, just choose Settings > General > About on your Apple TV…

According to Apple’s website, this firmware update adds support for Up Next and includes stability and performance fixes:

Adds support for Up Next with iTunes 11 or iTunes Match. See upcoming songs when playing music on your Apple TV. Add new songs and edit what’s queued with your Remote or with the Remote app.

The previous Apple TV update with iOS 5.1 carrying a build number of 10A406e was released back in September. It brought a couple new features, such as enhanced AirPlay, iTunes account switching, Shared Photo Streams and more.

As it turned out, that build also introduced quite a few problems, ranging from Wi-Fi issues all the way to the complete Apple TV failure.

That said, please do report back in comments any issues with today’s update.