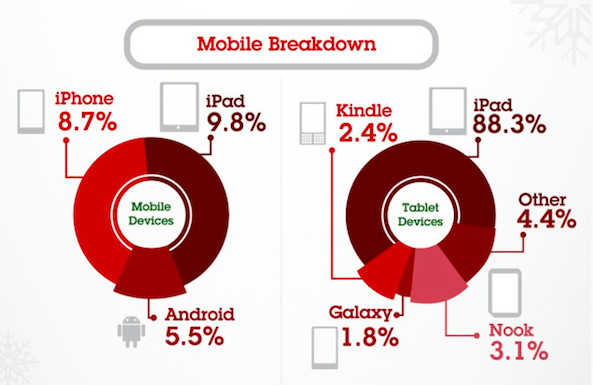 The annual day-after-Thanksgiving sales blitz known as Black Friday is now behind us. We’ll likely see several more deals and discounts over the next month, but the long lines and door busters are gone.

The lines, though, were noticeably shorter this year than they were in 2011, despite the fact that retail sales were up. And that can only mean that more people are doing their holiday shopping online…

According to data from IBM’s Digital Analytics Benchmark, online sales were up 20.7% over last year on Black Friday. And of the folks doing their shopping online, 24% of them were on a mobile device.

Unsurprisingly, Apple’s gadgets dominated Black Friday online shopping. IBM’s data shows that the iPad generated 9.8% of mobile web traffic to retailers that day, and the iPhone accounted for some 8.7%.

And despite the platform’s big lead in mobile marketshare, Android devices only accounted for 5.5% of shopping-related browsing during Black Friday — more than 3% less than the iPhone garnered by itself.

This actually seems to be a regular occurrence, with iOS frequently beating out Android in web browsing traffic. So what are Android users doing with their devices if they’re not using them to browse the web?

Did you do any Black Friday shopping online? What device did you use?