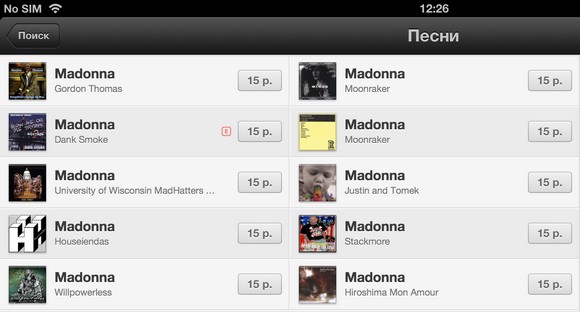 Folks in Russia will be happy to hear that it looks like Apple is preparing to finally launch its iTunes Music Store in the country. Several Russian iOS users are reporting that music is now searchable in the province’s App Store…

9to5Mac points to a report by Russian iPhone blog iPhones.ru, which confirms that iTunes music is starting to surface in the country. A search in the App Store for music returns a link to what appears to be an iTunes portal.

Most of the tracks listed are priced at 15 rubles, or around $.50, thus fulfilling the prophecy from a report we heard back in September that iTunes music would run significantly cheaper in Russia than it does almost anywhere else.

The full iTunes Music library isn’t available yet, but it should be shortly. The launch, coupled with upcoming Apple Store openings in Moscow and St. Petersburg, is expected to help struggling iOS device sales in the country.

According to the latest numbers, the iPhone only makes up 9% of Russia’s tiny smartphone market. And it’s believed that the lack of iTunes music and the iPhone’s ridiculous $1000 price tag are the largest factors in its failings.

We’ll let you know as soon as the full Russian iTunes Store is up and running.