Djay for iPhone (and iPod touch), a remarkable app for pro and would-be DJs and winner of the 2011 Apple Design Award, is now totally free, but for a limited time only. Mind you, this app previously sold for ten bucks a pop. You’re advised to take this opportunity and download djay for iPhone right now.

And if you’re really serious about throwing really cool parties, you’d want to consider djay Remote, a $4.99 remote control companion for the Mac version of djay (free trial available here). Developer Algoriddim is running this promotion to celebrate the iPhone launch of their another fine offering, a video mashup app aptly named Vjay which launched in the summer as a $5 iPad-only download…

Djay is a full-fledged DJ music app which transforms your device into a full-fledged portable DJ system via the nice and effective turntable user interface. It supports the iPhone 5’s taller screen and even works on the iPhone 3GS. 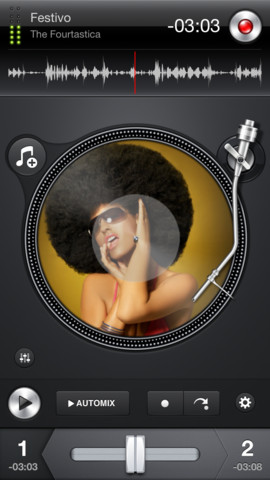 Cody wrote in his hands-on with Djay for iPhone:

It made listening to music fun again! Its simple user interface (which is always a good start), allowed me to easily choose songs from my iPod library. It also loaded the song’s album art, which was definitely a nice touch.

The program integrates with your music library and features ultra-low latency for pro mixing experience. 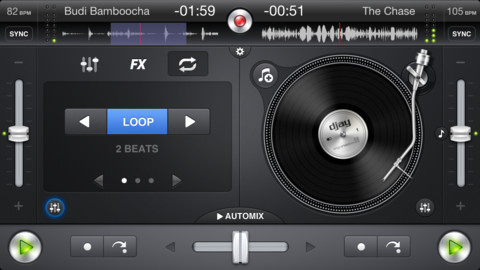 I suck at DJing, but I saw pro DJs at parties use both the Mac and iPad version to perform great live mixes. Even if you’re not into DJing, the app features the Automix mode which takes the pain out of mixing your favorite playlists.