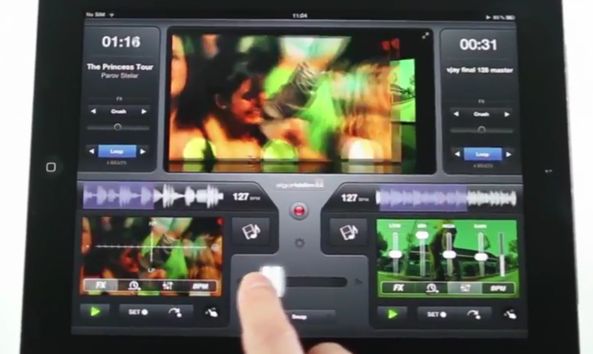 Something awesome just landed on your iPad, courtesy of Algoriddim, the maker of cool DJ-ing app dubbed djay. Their newest release is a music video mixing program for the iPad called vjay. Now, I’ve been to parties where high-tech DJs perform live mixes using just Algoriddim’s djay app, but this one takes the concept of fun to the next level…

Billed as an app “paving the way for the next generation of personal and professional video creativity”, vjay for iPad is admittedly cool.

It lets you use your tablet as an awesome video mixing machine allowing you to mix and scratch iTunes music videos or compose your own mash ups by combining songs from your music library with your own video clips.

It’s enhanced for the new iPad, supports external hardware such as Griffin’s DJ cable or Numark’s iDJ Live controller, streams wirelessly via AirPlay to your Apple TV and even lets you add clips taken with the iPad’s camera to your mix on the fly.

And because the iTunes Store support is built-in, you can browse, search, preview and purchase music videos on iTunes from within the app, which is really nice.

Here, your release notes from iTunes.

– Media Access – Create stunning mashups using all your media on your iPad, including videos, music, and footage from camera roll. vjay also comes with a free bundle of pre-loaded music video and high-quality footage.

– Live movie recording and sharing – With a simple touch of a button, easily save your mashups to the iPad in real-time and share with friends.

– Support for external displays – Easily plug into a TV and stream videos wirelessly to Apple TV.

– Integration with iTunes Store – browse, search, preview and purchase music videos on iTunes from within the app.

Requires iPad 2 or later running iOS 5 or higher. Enhanced for the new iPad.

According to a bunch of five-star reviews in iTunes, folks think this is an amazing app.

Looks quite stunning, don’t you think?