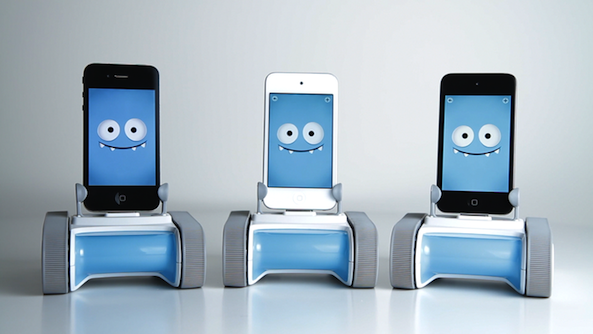 Romo the robot first appeared last November as a Kickstarter project. It was essentially a fully motorized, acrylic robot that was both controlled and powered by an iOS device. And despite looking like a build-it-yourself hobby-bot, it collected well over $100,000 in pledges.

Well this year, Romo is back and better than ever. The robot has been redesigned from the circuit board up, and has been improved in almost every way imaginable. It looks better, goes faster, thinks smarter and is much easier to use…

The first thing you’ll notice about the new Romo is its hardware. Gone is the former K’NEX-looking chassis, which has been replaced by a sleeker, futuristic-rover one. Battery life is quoted between 2-4 hours, and the robot can be recharged in 4 hours via a standard USB port.

Romo rebooted is also much faster than its predecessor. The Romotive team doesn’t give any specifics, but it can run circles around the previous version. The new Romo also features a tilting mechanism, which will allow you to tilt your iPhone or iPod touch up to 60 degrees.

But while the hardware is cool, Romo is really all about the software. Using the remote app, you can make Romo move in all directions, activate its iDevice’s camera, and even change its facial expressions. And since Romotive’s software is open-source, the sky is the limit here.

Unsurprisingly, Romo redux has already blown past its Kickstarter funding goal of $100,000. But if you’re really interested in one, you can still pledge $150 to the project, which is good enough for one new Romo the robot. Obviously, you’ll have to supply your own iDevice brain.

I have to admit, I’m very impressed with the Romo. Most of the iOS-controlled accessories you see these days are cheaply-made, slow, and have batteries that don’t last half an hour. This seems to be the opposite of all of that. And for $150, it might actually be worth purchasing.

What do you think of the new Romo?