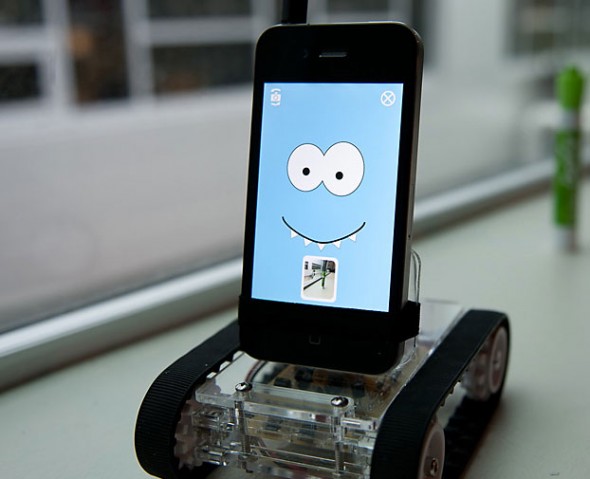 We’ve seen multiple iOS-controlled helicopters and other robotic accessories over the last few months. Apparently, using your iDevice to remotely control a bite-sized vehicle is becoming quite popular.

But even though the RC market is getting crowded, there is still tons of room for innovative products. Romotive proves that with Romo, the first iPhone/iPod touch-powered (and controlled) robot…

Romo is a fully motorized, acrylic robot that is both controlled and powered by an iOS device. The vehicle is a treaded, motorized chassis with a cradle for your iPhone, and interfaces with your handset through its audio jack (so technically any smartphone will work).

Once you’ve connected Romo to your device, the robot is controlled by its complimentary iOS application. Not only can the app direct Romo, but it can receive live video and audio from the connected gadget. Confused? Watch this video (careful, it gets loud):

Romo is the brainchild of engineers Peter Seid and Phu Nguyen, a.k.a Romotive. It’s a Kickstarter project that has recently blown past its $32,000 funding goal with over $114,000 in pledges. The robot is currently still in beta, but should be available in a few months.

What do you think of Romo?