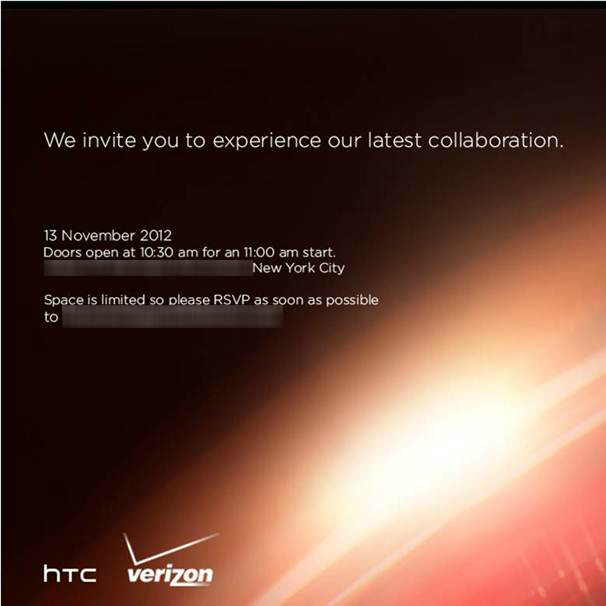 Apple continues to struggle to keep up with iPhone 5 demand, and Samsung just announced that it’s sold more than 30 million units of its flagship handset, the Galaxy S III. Is there room for another big player?

HTC is hoping so, as the Taiwanese company has just sent out press invitations for a jointed Verizon media event to take place on November 13th. And word has it that it’s going to unveil a new 5-inch superphone…

The invite reads: “we invite you to experience our latest calibration,” and the background graphic appears to be a zoomed-in Droid logo. And the folks over at DroidLife think that the announcement is DNA-related.

HTC’s Droid DNA is an Android-based handset with a 5-inch 1080p display, similar to the J Butterfly we told you about last month. The size and resolution give the screen a staggering 440 PPI (or pixels per square inch), enough to put even Apple’s highly regarded iPhone Retina display, which has a PPI measurement of 326, to shame.

But you can talk about features all day long. What HTC really needs here is a hit. The manufacturer, which once dominated the smartphone scene, has slowly watched Apple and Samsung overtake its marketshare. It’s had a string of unsuccessful quarters, and recently had to pull out of the US tablet race due to poor sales and feedback.

The question is, can HTC do it? If it unveils the 5-inch superphone next week, will that be enough to turn things around for the company? We’ll find out next Tuesday. The event kicks off in New York City at 11 a.m.

What do you think? Can HTC compete with the likes of Apple and Samsung?