In the race to win the tablet market, all it takes to gain an edge is for the leader to take its foot off the accelerator. Enough potential iPad buyers “sat out” the third-quarter waiting to learn more about the iPad mini, that the brief pause cut into Apple’s lead, allowing Android tablet companies to gain share.

According to data by market research firm IDC, Apple’s leadership in the third quarter – ahead of the iPad mini’s release – shrank to 50.4 percent, down from 59.7 percent a year ago. By contrast, Samsung lead a pack of Android rivals with a triple-digit growth…

Apple’s third-quarter slip was in dramatic contrast to its 65.5 percent tablet lead during the second quarter, fueled by increased sales to the education market and elsewhere. It is now clear Apple had to release the smaller iPad. The company confirmed this morning opening weekend sales of three million units of new iPads, meaning the iPad mini and the fourth-gen model.

We believe a sizeable percentage of consumers interested in buying an Apple tablet sat out the third quarter in anticipation of an announcement about the new iPad mini.

Samsung, of course, was the chief beneficiary of the pause in iPad market growth though it should be noted the South Korean company doesn’t report smartphone and tablet sales for competitive reasons. Therefore, IDC’s Samsung numbers are estimates (as opposed to Apple’s public device sales data) and should be taken with a grain of salt.

The maker of the Galaxy Tab and Note 10.1 shipped 5.1 million units during the third-quarter, a 115-percent increased from the second quarter and a 325 percent jump from the third quarter in 2011, the research firm announced.

Note that the above table is based on preliminary data (units shipments are in millions).

Amazon also saw a boost in its tablet market standing.

The Kindle Fire-maker owned nine percent of the tablet market for the third quarter, almost doubling its 4.8 percent market standing during the second quarter of 2012. In August, a report suggested Amazon’s Kindle Fire had 22 percent of US tablet sales.

Amazon briefly attacked the iPad mini’s price on its home page before removing the ad. 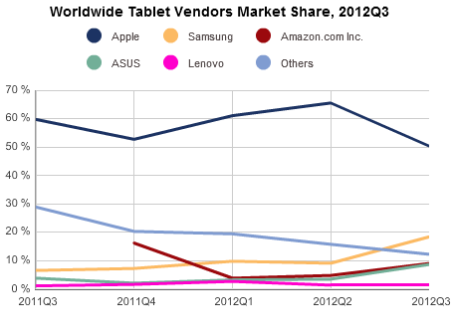 As for Microsoft’s Surface?

Saying “price points are critical in tablets”, IDC forecast the new tablet “will have a tough time winning a share of consumer wallet[s] with price points starting at $500”.

By the way, Acer (again) re-iterated that Microsoft may eat “hard rice” with the Surface.

For Android tablets, that arrived with the 7.9-inch iPad mini, directly confronting the market for devices with smaller footprints. With both the iPad and iPad mini shipping “we expect Apple to have a very good quarter”, IDC announced.

So, will Android tablets get another opportunity to make market gains now that Apple is shipping in both the large and small device categories?