Apple just announced that during the opening weekend it sold three million units of both the iPad mini and the fourth-generation iPad with Retina display, exceeding the three million iPad 3 tablets sold over the course of four days back in March. It’s also double the 1.5 million Wi-Fi-only iPad 3 units Apple confirmed it sold in March. Though it did not break down sales by model so we don’t know how many iPad minis the company moved, Tim Cook noted Apple “practically sold out of iPad minis”. Piper Jaffray analyst Gene Munster predicted sales of 1.5 million iPad minis over its opening weekend…

Shares gained more than $7 on the news compared to Friday’s close. In pre-market trading today, before the release hit the wires, Apple was down nearly $4.

According to a media release, the company is on pace to bring the Wi-Fi + Cellular versions of both iPad mini and fourth-generation iPad to the United States and “many more countries” in a few weeks, including mainland China.

While Apple did not divulge iPad mini sales, it noted that demand for the smaller tablet exceeded the initial supply. While many of the pre-orders have been shipped to customers, the company wrote, “some are scheduled to be shipped later this month”.

At the time of this writing, the US online Apple store quoted a two-week delivery estimate for the iPad mini and 3-5 days for the fourth-gen model. 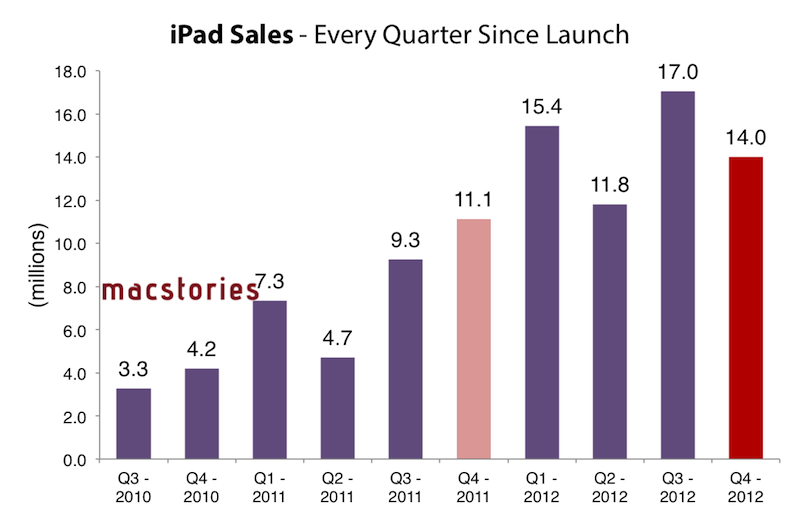 Chart via MacStories. Data excludes sales for the new models.

Another weekend, another billion dollars.

In comparison, it took 28 days to sell one millionth iPad back in 2010. And in March of this year, Apple over the course of four days sold three million units of the then-new iPad 3 in ten countries, 1.5 million of which were Wi-Fi-only models.

Of course, the smaller iPad launched in 34 countries versus just ten markets for the iPad 3 (the cellular version rolled out to 25 more markets a week later). Some are still confused as to how many iPad minis the company exactly sold.

Apple spokeswoman Natalie Kerris confirmed that the three million number is only for the the iPad Mini and the fourth-gen iPad, excluding iPad 2 which is still on sale.

Customers around the world love the new iPad mini and fourth generation iPad. We set a new launch weekend record and practically sold out of iPad minis. We’re working hard to build more quickly to meet the incredible demand.

Apple certainly thought sales data was worth sharing, but what do you think

Do these numbers bode well for the iPad?