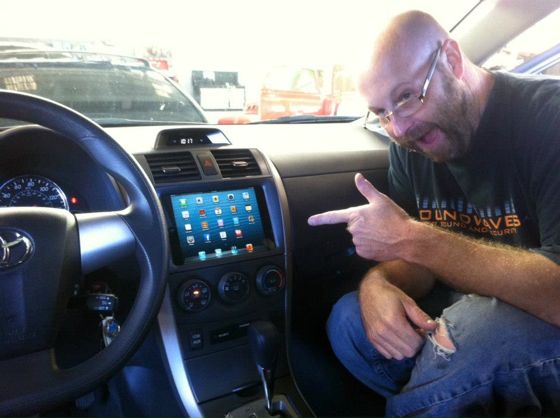 As you may have heard, Apple’s iPad mini finally went on sale earlier today. Some of you no doubt picked it up directly at your local Apple store (hope you didn’t have to stand in line outside the Fifth Avenue store). Others might still be biting their nails anxiously awaiting that USP truck. If you’re busy playing with or imagining handling Apple’s shiny new toy, why not make some room in your car’s dashboard so you can easily slide the iPad mini in and out? Look no further than Soundwaves of Tampa, which custom-built a dash in a 2012 Toyota Corolla. Video is right below…

Your video is right here.

You may be wondering how the heck this thing plays Pandora music as the Wi-Fi + Cellular iPad mini won’t arrive for at least another week or so. In reality, all Sondwaves of Tampa needed to do was configure wireless hotspot on a cellular device, such as the iPhone, another 3G/4G iPad or even a standalone MiFi device.

The team explained on Facebook they’re able to fabricate any vehicle for an iPad mini:

The iPad mini makes for one hell of a multitouch radio for your ride, don’t you think?