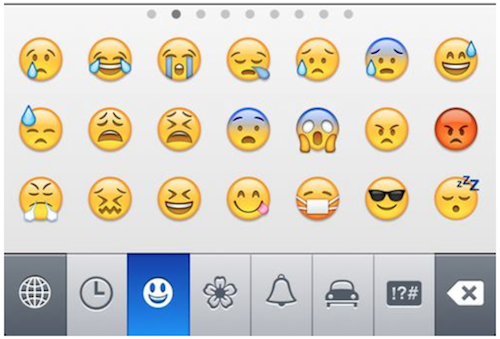 This is kind of interesting. With iOS 6 bringing expanded emoji support, it looks like Apple has decided to do something about the large number of emoji apps in the App Store.

According to a new report, several developers have received letters from the company, stating that their emoji apps are being removed now that the feature is built-in to iOS…

MacRumors is reporting this morning that it has heard from a large number of app developers that say they’ve recently received the following email from the App Review team:

We are writing to let you know your app, XXXX, has been removed from the App Store because it is no longer needed to unlock Emoji.

Since iOS 6 now provides Emoji support to all users, your app is no longer in compliance with the App Store Review Guidelines <https://developer.apple.com/appstore/resources/approval/guidelines.html>

2.12 Apps that are not very useful, are simply web sites bundled as apps, or do not provide any lasting entertainment value may be rejected

Thank you and best regards,

Ouch. The site points out, though, that while the letter says that the apps have already been removed, they do appear to still be accessible. So it’s unknown when the take-downs will take place.

This is what some people would call “sherlocked,” where a developer builds an app with features that aren’t included in iOS, only to have Apple come along and add those features in an update.

In addition to the 2.12 section, Apple’s App Store Review Guidelines also state that an app cannot duplicate the function of a built-in app, so it has grounds here. But it still comes across as a jerk move.

What’s your take on this? Should Apple be removing emoji apps?