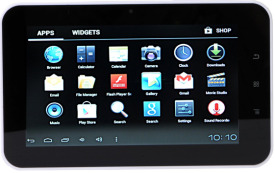 Yesterday, I wrote about Apple’s laughable iPhone market share in India that, according to IDC, was only 1.2 percent of all handset sales during the second quarter of this year, half the level a year earlier. It’s hard to justify a $800+ phone in a country where folks make an average of $200 a month, if they’re lucky. Meanwhile, cheap Android handsets have taken India by storm and now enjoy a commanding 50+ percent market share.

Though it remains to be seen if Apple’s inexpensive smaller iPad fits the big picture in the 1.24 billion people country, a new report out today by The New York Times makes the case for a sub-$50 Android tablet specifically made for students in India…

The tablet is called the Ubislate 7Ci, made by London-based Datawind.

The device runs Android 4.0.3 Ice Cream Sandwich, sports a seven-inch 800-by-480 screen and also has WiFi (with GPRS data support), a mic, a headphone jack, a front-facing camera and a USB port.

It’s powered by a 1GHz ARM Cortex-A8 processor with 512MB of RAM and has four gigabytes of internal storage.

Qenting Hardy has more in his write-up for The Times:

Every criticism a Western reviewer might have with this tablet (the keyboard is small for big American fingers, the camera resolution is low, the software has lots of ads) must also meet with the riposte, “Yeah, but…it’s only $40.” For people who can’t dream of owning even a first-generation iPad, it’s more than enough.

Datawind accepted more than 2.5 million orders to buy the device when it was announced. Company CEO Suneet Singh Tuli observes:

The biggest problem we have with this device is that none of the decision makers, the reviewers, or the trend setters are our customer.

Personal computers caught on in the U.S. when the price got to about 25 percent of the average person’s monthly income. In India, where people make $200 a month, that is about $50.

But How does it manage to make such a cheap tablet and turn profit in the process?

Mr. Singh says his cost of assembly for a Ubislate is about $37, and he sells it to the Indian government for $40. He keeps the price low by using Google’s free Android operating system and cheap semiconductors found in low-end cellphones.

In addition, he says, his company figured out how to make its own touch panel to fit behind the liquid crystal display screen. The LCD is still manufactured by an outside company.

It should be noted that the press in India slammed the company over a severe cash crunch and lack of manufacturing capacity to make these at needed scale.

Here’s a more detailed video overview of the Ubislate.

As you can see, the Ubislate is not exactly a speed demon but that’s beyond the point.

You get what you pay for.

While I have no doubt that the iPad would have been a far better choice given the breadth and availability of education-focused apps, not everyone can afford a $499 tablet, or even a $249 one – which is what the media believes the iPad mini will begin at (and you concur).

India has about 220 million students and the government plans to equip nearly all of them with a tablet. Somebody is going to make serious money selling seven-inchers to the government and it’s not going to be Apple.

Developing markets by all accounts will fuel growth in tablets and smartphones in the future and Apple could be missing out on ample opportunity to establish a foothold in those countries in terms of market share.

Of course, it would be unrealistic to expect a sub-$100 iPad for the developing world because that’s just not how Apple plays this game.

But given the iPad’s strong focus in education, and considering that Amazon is looking to displace iPads in U.S. schools (and they’re selling Kindles at cost), it’s Apple’s market to lose, no?