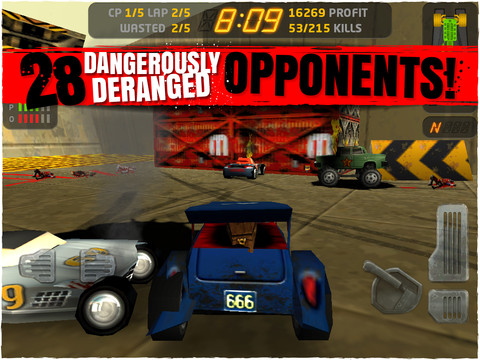 Carmageddon, a classic arcade racing game inspired by the 1975 cult classic movie Death Race 2000, won many recognition and awards, earning its notoriety for graphical violence stemming from the carnage concept: the locals stay out on the streets at their peril and you run over or  smash into them with your automotive killing machine.

As you could imagine, Carmageddon was banned around the world, which only helped fuel its popularity. I was a little bit taken aback that Apple actually allowed such a title into its puritanic App Store environment (maybe because the concept calls for borderline comedy violence?). I’ve included a trailer, a video interview with developers and some screenies right after the break…

Developers swear nothing’s been changed in the iPhone and iPad version to appease Apple’s censors.

As well as using your car as a weapon, every level is sprinkled generously with power-ups that have a vast variety of mad effects, adding a whole extra level of craziness to the proceedings. In every event you have the option to “play it your way”…

Waste all your opponents, kill every pedestrian, or (perish the thought) complete all the laps. Oh and watch out – the cops in their super-tough armoured patrol vehicles are lurking, and if they catch you being bad they’ll be down on you like several tons of cold pork!

If you want to unlock all the cars (apart from the secret one) and all the races, you can do so via an  in-app purchase. Carmageddon was originally produced by Stainless Games and published by Interplay and SCi.

Check out a gallery of screenshots from the iPad version.

This is your trailer.

And here’s an interview with developers.

Don’t forget that the game is a free universal binary download but today only – better add it immediately to your download queue.

Will you be passing on Carmageddon or give it a try?