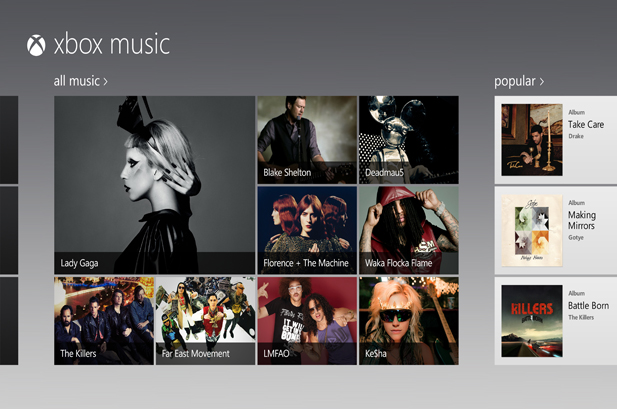 Microsoft announced Sunday evening that it was going to be launching its new streaming music service, Xbox Music, in the coming weeks. The move will pit Microsoft directly against Spotify, RDIO, and even iTunes.

Xbox Music will debut on — what else — the Xbox, and then roll out to Windows 8 and Windows Phone 8 devices as they become available later this month. Microsoft says it’s also working on iOS and Android clients…

“Like Spotify, users will be able to search for all the songs, artists, and albums they want to listen to, and begin streaming them for free on supported devices. Like Pandora, they can listen to music similar to a certain song or artist, through playlists created by the service’s Smart DJ. Or users can create their own custom playlists of songs, which will become available across whichever devices they want to listen from.”

Xbox Music will come in two flavors: an ad-supported free version, and a premium version called Xbox Music Pass that will run you $9.99 per month. There will also be a Music Store for purchasing tracks and albums.

Word is that Microsoft has licensed music from all of the major record labels, as well as independents, giving it a library in upwards of 30 million songs. It’s also said to be working on an iTunes Match-like cloud service.

Microsoft says it will start rolling out an Xbox Live update to 360 owners on Tuesday morning, which will give them access to Xbox Music. And on October 26, it will be available via Windows 8 computers and tablets.

There’s no word on when the iOS and Android apps will be available, but it sounds like they aren’t too far off.

What are your feelings on Microsoft’s music plans?