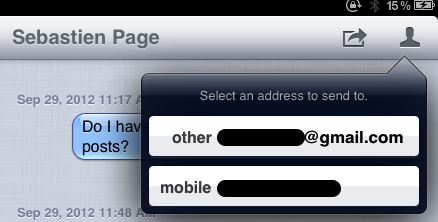 The idea of iMessage is great. It allows you to easily chat with friends and family across all iOS devices and Macs without incurring SMS fees from carriers.

Though iMessage is extremely convenient, it does have plenty of opportunities for improvement, which isn’t surprising, considering it’s only been out for a little over a year. But Apple has been steadily making improvements, for instance, the latest update to OS X, allows Mac users to sync iMessages sent and received from phone numbers.

Another major issue that iMessage runs into is organization. For example, if you’re chatting with a friend that has three separate iMessage ID’s, each chat started with each individual ID will result in a new iMessage thread for that contact. That’s a total of three threads, just to talk to a single contact. This, obviously, can become extremely disconcerting when trying to carry on a conversation. Wouldn’t it be nice if you could easily combine messages by contact, instead of iMessage ID?

That’s the exact premise behind Merge — a new jailbreak tweak from developers Joshua Tucker, and Andrew Richardson. Take a look inside as we explain how Merge works…

From the developer description:

Merge improves Messages by combining all messages by contact instead of by address. Instead of each contact’s phone number or email using its own conversation thread, Merge combines them all together and marks a line to show you which number or email is being used. Merge also offers a quick way to switch the address you are sending to. To change to a different address in a conversation, hold down the Contact button or contact icon on the iPad to choose another address to send to. Holding the contact’s name down in the New Message composition view allows you to switch addresses also.

In my humble opinion, a tweak like Merge just makes sense. In fact, when you think about it, it’s hard to understand why Apple didn’t take this approach in the first place. I’m sure they probably toyed with the idea, as it seems like common sense; perhaps there was some other logistical reason behind their decision.

After installing Merge, you’ll notice that all of your iMessage threads are instantly sorted together by contact instead of individual ID. This made my personal list of threads contained within the Messages app drop from 20 to 12 different threads.

Within each thread, it’s easy to discern which number or email address actually sent or received a particular message. This is accomplished using the little grey status message above the message bubbles.

Switching between a contact’s email or phone number is as simple as tapping and holding the contact icon on the iPad, or contact button on the iPhone. Doing so presents a list of all of the valid email addresses or phone numbers contained within the individual contact.

Merge is available now on the Cydia’s ModMyi repo for $1.49, and it’s compatible with all jailbroken iOS devices running iOS 5.x. Merge, like the previously mentioned Emblem, was just revealed by Josh at this year’s JailbreakCon in San Francisco, CA.

What do you think about Merge? Is it something that you would use? Let me know your thoughts in the comments below.