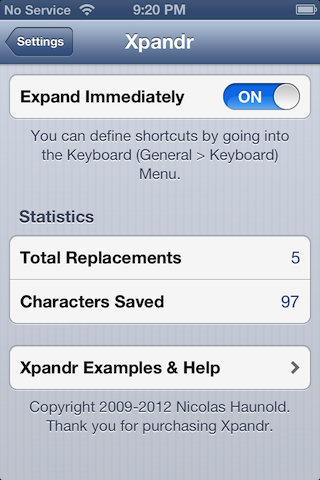 If you’re a blogger, then you’d be crazy not to use TextExpander. TextExpander is an app that runs on the Mac, that automatically expands shortcuts into larger lines of text.

For example, I have a shortcut named jb, which expands fully to the word jailbreak. It works with phrases to, for instance, jbt = jailbreak tweak. Needless to say, TextExpander is a life saver for those of us who have to type the same words and phrases over and over again, day in, and day out.

Apple introduced a sort of “TextExpander light” in iOS 5, and it came in the form of Keyboard Shortcuts. Keyboard shortcuts work, but unlike TextExpander, they don’t immediately expand; instead, the shortcuts appear as suggestions, and then you have to use the space bar to fully expand them.

Xpandr 2, is the jailbreak tweak that seeks to put an end to this issue. Check out our full video walkthrough inside…

Since Xpandr two plays off of the already existing Keyboard Shortcuts feature in iOS, you need to setup some shortcuts before you can actually use the tweak. To do that, simply head over to the Settings > General > Keyboard > Shortcuts. Once there you should see an Add New Shortcut option at the bottom; tap that, and enter the phrase you want to assign to the shortcut, and a few characters to comprise the actual shortcut that you will use.

Once you’ve set up all of the shortcuts that you desire, install Xpandr 2, and head to its settings panel in the Settings app. There, you will see an option for Expand Immediately. Toggle that option to the on position, and you’re ready to start expanding some text.

The wonderful thing about Xpandr 2, is that it’s native; it’s totally system wide. That means that it works in any app, unlike the dumbed down iOS version of TextExpander. Even better, is the fact that Apple implemented iCloud syncing in iOS 6, so once all of your iOS 6 devices are jailbroken and running Xpandr, you’ll have immediate expansion for your entire list of keyboard shortcuts across all devices.

Xpandr is available for $1.99 on Cydia’s BigBoss repo. Some have commented that two bucks is an expensive price to pay in order to not have to press the spacebar. To those people who say that, you won’t understand unless you use TextExpander on a regular basis. Having text that immediately expands, instead of relying on a press of the spacebar can save a lot of time if you’re typing. You don’t have to reprogram your mind each time you switch from the desktop to a mobile platform.

Not only that, but Xpandr features quite a few interesting aspects that go deeper than just expanding basic text. For one, there’s a counter located in the settings panel for the tweak that allows you to see how many characters you’ve saved over the lifetime of usage.

Secondly, there’s a full document that shows you how to get much more out of Xpandr 2. You can automatically execute scripts with the included scripting syntax, and it includes RFC3339-compatible dates if you want to get really geeky.

Personally, I wish that Apple’s own built in shortcuts worked more like Xpandr 2, but I can see how that could become confusing for some novice users. Until that day comes, there’s always this tweak.

Let me know what you think about Xpandr 2 in the comments section below.