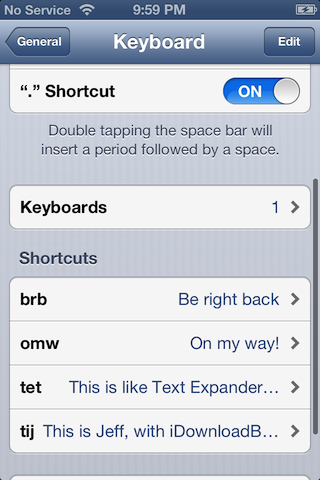 One of the more under the radar items in iOS, is the TextExpander inspired Keyboard Shortcuts feature. Keyboard Shortcuts allow you to create quick shortcuts, which then expand to larger words or phases. It’s a feature that’s best used for stuff that you tend to type over and over again, which helps reduce repetition, therefore making you more productive.

In the past with iOS 5, these shortcuts resided independently on each device, meaning you had to setup all of your shortcuts on each device individually. If you do a lot of blogging or other forms of writing on your iOS device, then chances are, you can benefit from having a decent array of shortcuts. With that thought it mind, it’s a headache to have to setup each device manually with the same shortcuts.

We already knew that iOS 6 would feature custom dictionary iCloud syncing, but it was never really clear whether or not Keyboard Shortcuts fell within that area. It’s been one of the features that I’ve been saying would benefit from iCloud syncing for a long time now, and thankfully, it looks like Apple took care of that with iOS 6.

To enable Keyboard Shortcut syncing in iOS, ensure that Documents & Data are enabled in iCloud. That’s the resource that iCloud uses to transmit the Keyboard Shortcuts between iOS devices. To do so, head to Settings > iCloud > and Documents & Data. Ensure that the toggle is switched to the on position. Be sure to do this for all of the iCloud enabled iOS devices you want to sync. 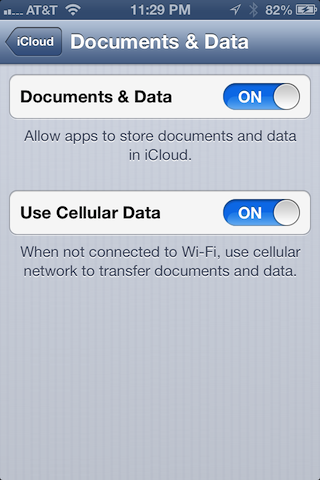 Once you’ve done that, head over to the Keyboard Shortcuts, which can be found in Settings > General > Keyboard > Shortcuts. Once there, any shortcuts that you add or remove will be reflected on all other iCloud enabled devices running iOS 6.

If you’re having problems with the syncing, I’ve found it helpful to disable the Documents & Data toggle referenced above, and then simply reenable it. That will usually force iCloud to pick up any changes. If you happen to keep the the Documents & Data disabled for iCloud on a particular device, the existing shortcuts will remain on device, but the syncing will cease.

Keyboard Shortcuts are a useful, if not underused feature in iOS. Perhaps the prospect of never needing to recreate a full list of shortcuts, will make the feature more appealing to users.

Do you use Keyboard Shortcuts? If so, what do you think about the new iCloud syncing?