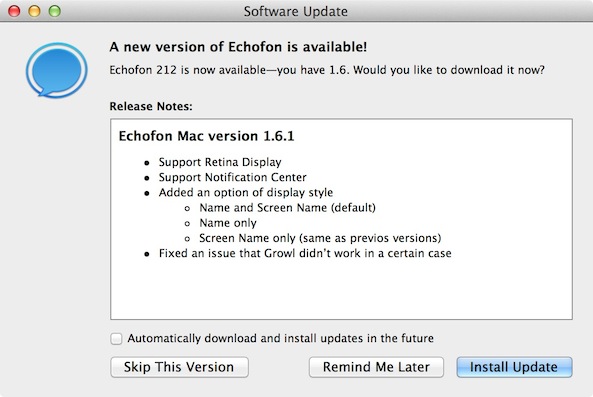 Echofon for Mac version 1.6.1 was just pushed to my desktop a few minutes ago, and it finally brings support for the Retina Display, Notification Center, and more…

Since Tweetbot for Mac’s beta is very limited (only Alpha users with tokens can use it due to the whole Twitter API change fiasco currently going on), I’ve been devoid of any client with Retina Display support.

Twitter’s own app is likely done, and won’t see the much anticipated Retina Display support added to it, so options are few and far between.

It’s good to see Echofon come through for its users. Although, Tweetbot for Mac shows a lot of promise, I’ve always been a big Echofon user on the Mac, and this latest update will help solidify my future usage.

As a side note, the Mac App Store version of Echofon hasn’t been updated yet, but I’m sure that it will be soon. In the meantime, you can grab the non-MAS version here.

What’s your current Twitter client of choice on the Mac?