Android handsets started really picking up steam in late 2009 with the release of the Motorola Droid. Shortly after that, Google’s mobile platform took over the smartphone industry and it has since controlled around 50% of the US market.

But Apple hasn’t taken the challenge lying down. Thanks to its iPhone 3GS-4-4S lineup covering all price points, and its new partnerships with several smaller carriers, Apple’s handsets now account for a healthy 30% of the same US market…

Well known marketing research firm comScore just completed its quarterly survey of over 30,000 US mobile subscribers to find out what handsets consumers are using these days. The recent data comes from a 3 month period ending in July.

When it comes to overall mobile phones (both smart and feature phones), Samsung is in the lead with 25.6% of the market, and LG is right behind it at 18.4%. Interestingly enough, Apple, who doesn’t even make feature phones, isn’t far behind with 16.3%. And Motorola, who once ruled the feature phone racket, now only accounts for 11.2%. 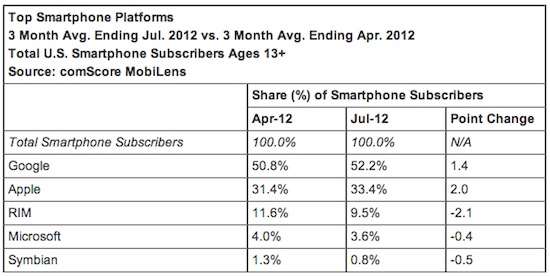 As for smartphone marketshare numbers, Google is still hovering around 50% (52.2%). More notably, Apple jumped 2% from last quarter’s numbers and now accounts for over 33%. This means that 1 in every 3 smartphone owners polled has an iPhone. And the usual suspects, RIM and Microsoft, brought up the rear with 9.5% and 3.6% respectively.

Of course, these numbers could change dramatically over the next several months. New Windows Phone and Android handsets are expected to be announced tomorrow, and Apple just sent out invites to its big iPhone event slated for next week.

Get ready, things are about to get interesting.