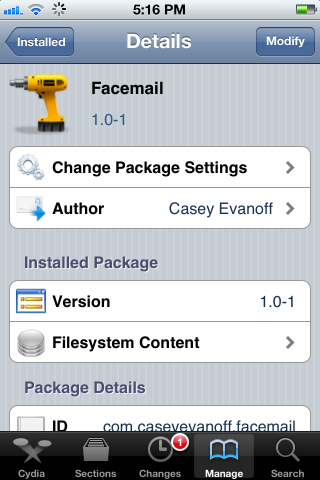 FaceMail is a recently released jailbreak tweak that forces Facebook links appearing in the stock Mail app to open in the Facebook app instead of Safari.

At first glance, this might seem like the perfect tweak for avid users of the Facebook app, but upon further inspection it has a few shortcomings. Check inside for the full rundown…

While it’s true that Facebook links are forced to open in the Facebook app as opposed to Safari, it merely opens to Facebook’s notification overlay instead of intelligently mapping where the link should lead within the app.

This means that any Facebook link, whether it’s a link to a message, or a link to unsubscribe from email notifications, opens up the notification overlay. This makes FaceMail a lot less useful than it may appear on the surface, and certainly so for older links where notifications may no longer be relevant or present.

With that all being said, I can see FaceMail being of use for brand new email messages, where their respective notifications haven’t been dismissed. Other than that, I found FaceMail to be less useful than I initially imagined, although that’s no fault of the developer, who clearly states how the tweak works in the description.

FaceMail can be had free of charge from Cydia’s BigBoss repo. What do you think?