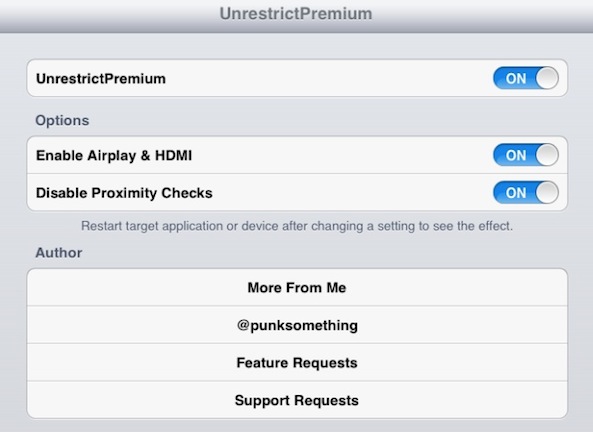 Doesn’t it get under your skin when you try to watch a video on the big screen via AirPlay, and at the most, all you get is sound? Sometimes companies decide to restrict users from using AirPlay or HDMI output, which results in the frustrating scenario just mentioned.

This prevents certain apps like Amazon Instant Video, HBOGO, and DirectTV from being enjoyed on your television set via AirPlay using an Apple TV.

It’s actually surprising that it took this long for a Cydia developer to come up with a fix for this, but it’s finally here. UnrestrictPremium is a tweak that allows you to watch video via AirPlay mirroring or HDMI output, even if the developer of the app restricts users from doing so. Want to see how it works? Then step inside and watch our hands-on video walkthrough…

Once installed, UnrestrictPremium places a settings panel in your Settings app to activate the tweak. I later found that these on/off toggles had little to do with the tweak working or not working. It always worked for me if the tweak was installed, regardless of the state of the toggles. Another thing to keep in mind, is that installing UnrestrictPremium also installs Xcon as a prerequisite, because Xcon a necessity for using certain video apps on a jailbroken device.

At $2.99 it’s not the cheapest tweak on the block, but it’s well worth it if you watch a lot of video using any of the aforementioned apps. Head over to Cydia’s BigBoss repo if you’d like to check it out, and let me know what you think about it in the comment section below.