Add Acrylic Software on your list of iOS developers that got snatched up by rival platform providers (Sparrow, too!). As Acrylic excels at gorgeous user interfaces, no wonder they will be joining Facebook’s design team.

The social networking giant was also called out for poaching former and current Apple engineers to allegedly work on a Facebook phone project. Just last month, for example, Facebook hired a former Apple UI designer Chris Weeldreyer. It’s curious, to say the least, that Facebook is eyeing iOS developers and Apple engineers who have an impeccable eye for detail and UI design…

Perhaps the Acrylic team will help Facebook re-shape its sluggish and fugly Facebook for iOS client, which the company said would soon receive a major update, a top to bottom re-write focused on speed?

According to a blog post, the Acrylic team will be making the move to San Francisco in the coming weeks.

I’m happy to announce today that we’ve packed up our small Vancouver studio and will be making the move to San Francisco in the coming weeks to join the design team at Facebook.

For the past four years, we’ve worked tirelessly on creating truly awesome products with a focus on innovation and great design, and I’m incredibly proud of the work we’ve been able to accomplish during that time. Our flagship apps, Wallet and Pulp, have been used and loved by hundreds of thousands of people around the world. Building these products has been a fun and exciting ride, but the time has come to move on to newer and bigger challenges.

Facebook is an invaluable service that we all use daily, and a company I believe is one of the most innovative and important around today. After visiting late last year, I discovered that we shared many of the same core product design goals and principles, and it soon became obvious that it was a natural fit. Simply put, there’s an opportunity at Facebook to have a big impact in many people’s lives. More importantly, Facebook is full of extremely talented people who will be able to help realize its full potential in the years to come.

Our products and services have not been acquired by Facebook, and while there are no plans for further development on them, Wallet and Pulp will continue to remain available for download and purchase in their current form. We’ll certainly be the first to let you know of any updates or changes here in the future.

A special thanks to all of our customers and supporters who have helped us grow and build the best products possible throughout the last four years. We wouldn’t have been able to do it without you.

Vancouver, Canada-headquartered Acrylic Software is behind Wallet, a $9.99 iOS app which keeps track of and secures your most sensitive information, seen below. 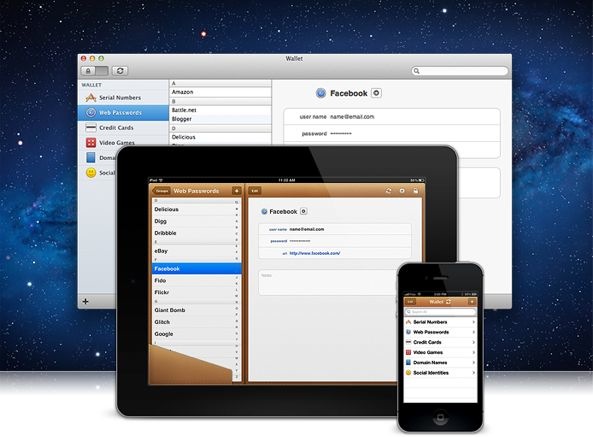 The company also makes Pulp, a $4.99 iPad app which takes your RSS feeds and presents articles in a beautifully familiar newspaper format, along with headlines, nice typography and big photos.

Both apps are also available on the Mac App Store.