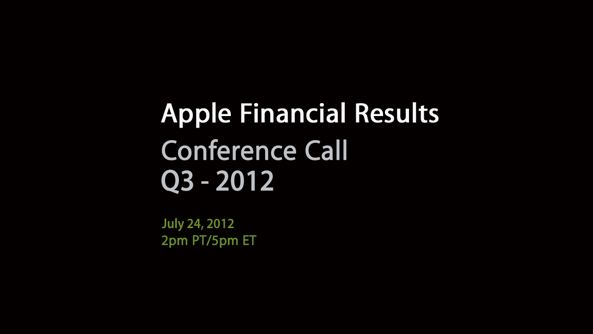 Apple will be reporting results for the second calendar 2012 quarter (corresponding to its third fiscal 2012 quarter) next Tuesday, July 24, shortly after the markets close at 2pm Pacific, 5pm Eastern.

Ahead of the earnings release, Apple just issued an alert this morning regarding streaming audio from the conference call which will be available here via QuickTime, beginning on July 24 at 2pm Pacific. The iDB team will be following the conference call so you don’t have to, posting interesting bits and pieces right as we learn about them…

Apple is expected to announce record iPad sales. iPhone estimates are in the range of 30 million units versus 37.1 million and 35.1 million units in Q4 2011 and Q1 2012, respectively.

The decline in projected iPhone performance is expected as Apple normally updates its handset once a year and is close to releasing the next iPhone model (the iPhone 4S is nine months old now) around October of this year.

Swirling iPhone 5 rumors aren’t helping either as people withhold their purchases, mostly on the basis of what they’ve read so much in the press about the forthcoming new model.

To listen to the webcast, you will need any iPhone, iPad or iPod touch model running iOS 4.2 or above, any Mac running OS X 10.5 or above or any PC running QuickTime 7 or later.

QuickTime is a free download for Mac and Windows right here.

What do you think Apple will report come next Tuesday?