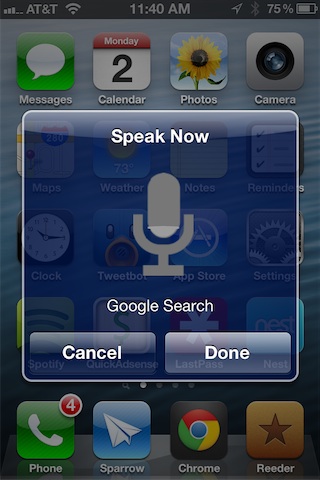 VoiceSearch is a relatively new jailbreak tweak that allows you to perform Google voice searches from anywhere using a simple Activator action.

Obviously VoiceSearch can’t replace all of the functionality that Siri brings to the table on the iPhone 4S, and upcoming iOS 6 update for the new iPad, but it is a somewhat decent holdover for non Siri-enabled devices…

The reason I say that it’s no Siri replacement, is because all you can do is search Google with your voice. You can’t direct the device to find items or information on your phone, schedule appointments, send messages, and things of that nature.

As its name states, you’re completely limited to voice searches on Google. That’s not necessarily a bad thing, if this is the type of tweak you’re looking for; from my experience, it performed admirably.

VoiceSearch is a free tweak on Cydia’s BigBoss repo. Let us know if you have, or plan on trying it in the comments below.