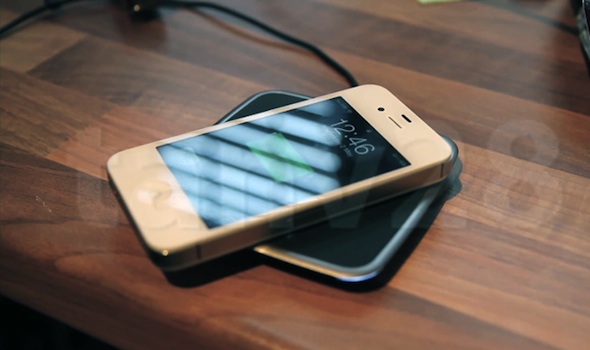 Rumors that Apple is working on a wireless charging solution for its iOS devices have been bouncing around for years. We’ve even seen evidence of this in the company’s patent filings.

But if you can’t wait for Apple to implement the feature, you could always do it yourself. Tanveer Islam did it with his iPhone 4S, using a Powermat and a little know-how…

The hack is not for the weak at heart, however, as it involves disassembling a Powermat, an iPhone, and some heavy duty soldering. But it’s hard to argue with the results. Islam says the wireless charging works flawlessly, and only adds about 1 millimeter to the iPhone’s overall thickness.

“There are wireless charging options out there such as the powermat system but they all involve slipping on a jacket around the iPhone. I wanted to internalize the technology so that the beauty of the iPhone not hidden away!”

Recent rumors point to Apple going with a redesigned charging port in its next iPhone, so we don’t expect to see a wireless charging method from them anytime soon.

But maybe Tanveer’s work will inspire third-party manufacturers to come up with a simpler solution, like a rear panel replacement or something. We’d buy one.

What do you think of wireless charging? Is it the future, or just a passing fad?