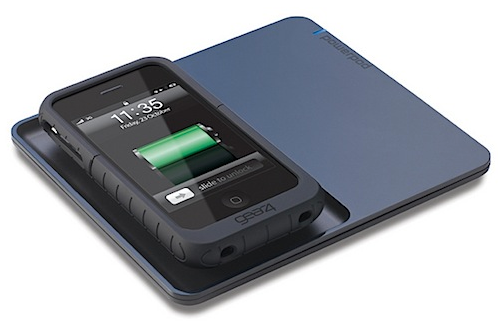 We’ve already heard that Apple is researching wireless charging methods. We reported on an Apple patent a few weeks ago that suggested that the Cupertino company was investigating an alternative to standard plug-in chargers.

Now there is a new report suggesting that Apple is indeed interested in wire-free power. So much so, that many are speculating that the new technology could make its way into iDevices as early as 2012…

In a lengthy article yesterday, The Wall Street Journal spelled out a lot of the rumors and expectation surrounding Apple’s next smartphone. The consensus seems to be that the next iPhone will be a moderate upgrade from the current model.

However, next year’s model is a different story. The iPhone 6 has been rumored to be a total revamp, sporting a completely new design and a host of new features. According to the WSJ, one of its new features could have something to do with charging:

“People briefed on Apple’s plans said the company is planning a major iPhone revamp then, with one person saying the company has been experimenting with the features such as a new way of charging the phone.”

This matches the information given to Joshua Topolsky from This is my next earlier this year:

“While the art we’ve seen shows some form of inductive or touch charging, our sources can’t confirm whether or not Apple’s working on its own version of cable-free juicing.”

As 9to5Mac points out, this could suggest that Apple is working on a Palm Pre-esque type of charger. The Palm Pre line has offered the Touchstone wireless charging method since its inception in 2009.

Many folks have expressed a concern over wireless charging hampering battery performance or charge time, but I don’t think that would be a problem. Apple has set the bar so high already, they wouldn’t dream of going backwards.