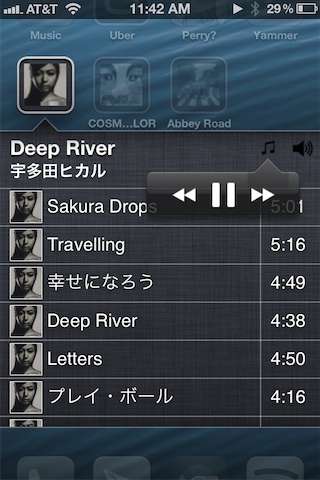 Playing music from within a Home screen folder is now within the realm of possibilities, thanks to a recently released jailbreak tweak called FoldMusic. Once FoldMusic is installed on your iPod or iPod touch, you can easily add new albums or playlists to a Home screen folder.

From there you can open the folder, and tap to play the tracks within. You’ll also find volume/AirPlay controls, and transport controls for previous, play, and skip — all located conveniently within each folder.

For a full video walkthrough of FoldMusic, check inside…

I have to say that I’m extremely impressed with the way FoldMusic looks and feels, it’s unlike any other jailbreak tweak I’ve covered thus far, and definitely worth a look if not for the originality factor alone. Even better is the fact that it works just as expected, it’s a stable tweak that reliably plays your tunes directly from their designated folders.

FoldMusic’s folders are created at the root level of your Home screen, so you can’t place them within other folders. FoldMusic is also limited to the music you have stored locally on your device, so it won’t work with Pandora or Spotify playlists either.

Another thing I should add, is that there isn’t full compatibility with the iPad. That means you’ll probably want to stick with the iPhone or iPod touch when it comes to FoldMusic.

If you want to play music within your Home screen folders, then mosey on over to Cydia’s BigBoss repo where you can grab FoldMusic for $1.50. What do you think?