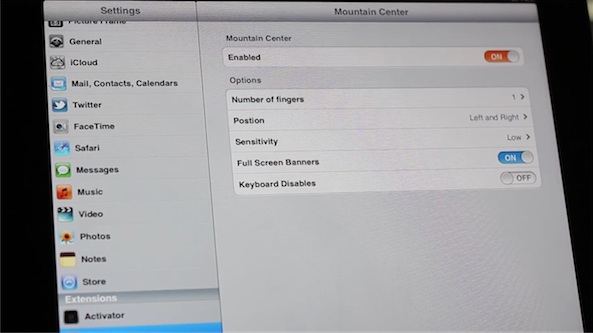 Mountain Center is an upcoming jailbreak tweak that brings an OS X Mountain Lion like Notification Center to iOS. Now if this all seems a bit familiar to you, that’s probably because you’ve seen or read about MountainLionCenter, which performs a similar action.

Oddly enough, it seems that both tweaks were being developed around the same time, completely independent of one another, hence the overlapping of functionality. But there is good news, because the tweaks differ enough to warrant giving them both a separate look.

Mountain Center adds a few options that you won’t find in MountainLionCenter, like the ability to invoke Notification Center from either side of the screen, and more. Take a look at our full video walkthrough inside…

Perhaps the most compelling feature about Mountain Center is that it will be compatible with the iPhone/iPod touch as well. Although it’s a tweak that’s definitely more suited for the larger screen, the fact that the developer has given end users a choice is a nice gesture.

Mountain Center is still in development, and no ETA has been set yet, but you will be able to find it on Cydia’s BigBoss repo upon release.

True, both MountainLionCenter and Mountain Center perform the same core functionality, but I think there’s enough difference to be had here that both can coexist peacefully. What do you think?