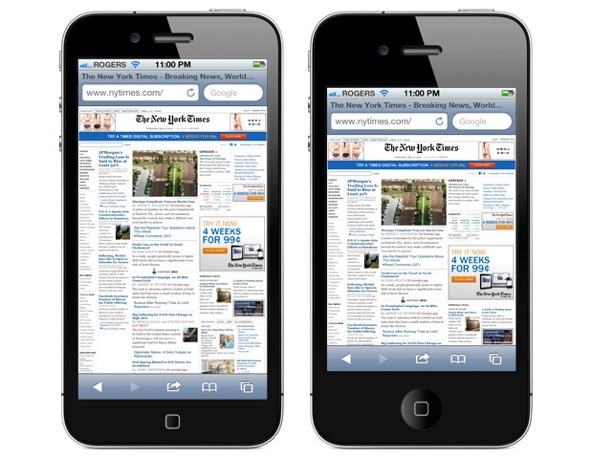 According to recent rumors, reports and speculation, Apple’s next-generation smartphone will finally receive a bump in screen size. It seems like everyone is convinced that the next iPhone, expected to drop later this year, will be sporting an all-new 4-inch display.

But while we’ve heard a number of theories regarding how Apple could go about implementing such a change, we’ve yet to hear any explanations for why it would want to. Why would it all of a sudden want to change the iPhone’s display size after 5 years?

Of course, the easiest explanation would be to say that Apple is making the iPhone’s screen larger to match wits with its Android counterparts. But considering that at 3.5-inches, the phone is already the best-selling device on nearly every one of its carrier partners, this doesn’t really make sense.

The New York Times’ David Pogue seems to think it has something to do with battery size. He believes that extending the iPhone’s screen another half inch would allow Apple to use a larger battery to help power new features like LTE.

“So I’m guessing that the iPhone’s upsizing will be equally necessary to accomodate a bigger battery, so that Apple can solve the 4G/dead battery issue. I’ll bet you that when the new iPhone appears, Apple will point out that the battery life is no worse than the iphone 4S’s, even though it’s got 4G LTE.”

Pogue might actually be onto something here. Even with Qualcomm’s latest LTE chipsets, the 4G technology is bound to still add a ton of stress to the iPhone’s battery. Mix in a larger display, and the handset’s current power problems, and a bigger battery starts to make sense. Hey, it worked for the third-generation iPad.

But if you don’t like the “bigger battery” theory, TheNextWeb’s Matthew Panzarino has a similarly interesting take. He suggests that Apple could be giving the iPhone a 4-inch, 16:9 display to make it more compatible with HD video.

“While all movies aren’t shot at 16:9, most of them are significantly closer to that aspect ratio than 3:2. So what if Apple is preparing a for the release of its eventual movie streaming service by making the phone more film-friendly?”

This is also a good point. Content delivery is ingrained in Apple’s DNA, and it’s no secret that the company is betting a lot on the future of HD video streaming. So what better way to help usher in such a future than to introduce a film-friendly handset?

In the end, this is all pure speculation. But you can bet that if Apple really is going to rock the boat, and make a major change to its most popular product — one that will cause hundreds of thousands of apps to be redesigned — it has a solid reason for doing so. The question is, what is it?