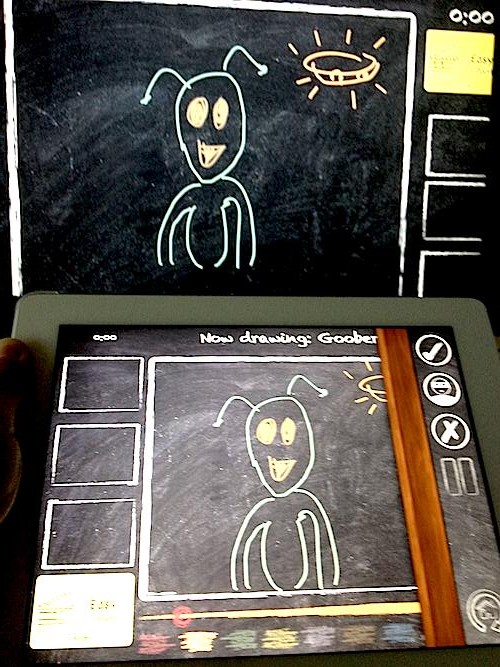 I’ve said before that I felt like AirPlay Mirroring was one of the most underrated features of iOS 5. The ability to wirelessly stream content from the device to a TV seemed like an open invitation for iOS developers to create console-esque games.

We’ve seen a couple of big name titles take advantage of this, but perhaps none of them showcases the feature’s potential better than Cerebral Gardens’ recently-released Party Doodles…

iLounge spotlights the party game, which uses both the iPad and the Apple TV to create one of the coolest renditions of pictionary we’ve ever seen: two teams, of up to 10 players each, use their tablets to draw clues for secret items and phrases on the big screen for the other team to guess. So yes, it’s a lot like DrawSomething.

The game is free, and comes with enough word cards to last you through a couple of parties. Should you run out, however, there are 9 additional card packs available for just $1 a piece.

Even if you don’t think Party Doodles is groundbreaking, you have to admit it shows promise. Imagine playing all of your favorite party games this way: Scattergories, Taboo, SceneIt?

Honestly, I’m surprised that developers aren’t jumping all over this. And even more so that Apple isn’t putting this in commercials. Maybe not enough folks have Apple TVs yet. But with 300+ million iOS devices in the wild, you would think this would be a great incentive for them to go out and get one.