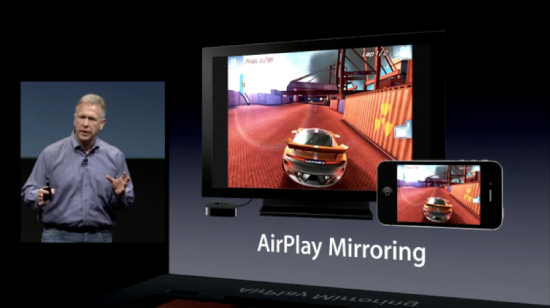 Now that the highly anticipated iPhone event has come and gone, it’s time to start looking to the future. Pundits and analysts seem to have mixed feelings about Apple’s latest handset, but Tim Cook and company are just getting started.

While the iPhone 4S is still an amazing piece of hardware, it was clear that software was the star of yesterday’s show. But among the new Cards app and Find My Friends, one software feature was grossly overlooked: AirPlay Mirroring…

We originally saw the technology back at WWDC, when Apple mentioned the feature in its iOS 5 keynote. Using Apple’s AirPlay platform and an Apple TV, users could stream live activity from their iPad 2s to their TV sets.

During yesterday’s event, in passing, Apple mentioned that the new iPhone 4S would also be capable of AirPlay mirroring. This means that users can use the device to do things like surf the web, and more importantly play games, on their TVs.

Let’s think about this for a minute. With this feature, developers are not only capable of designing iOS games that play full screen on HD television sets, they can utilize the iPhone 4S as a controller of sorts. This video may look familiar:

Imagine if Apple would have had a few big-name game developers, like Epic or EA, demo the feature on stage yesterday using the new handset. What if Epic would have shown Infinity Blade 2 on a TV set, controlling the action with the iPhone 4S.

AirPlay mirroring is groundbreaking. And with all of the different gyros and sensors in the new iPhone, not to mention its powerful A5 processor, the possibilities for developers are practically endless. Think Wii-style games.

So why didn’t Apple give AirPlay mirroring the light of day? Well, there is one downside to the feature: it requires an Apple TV. Although the company has seen steady sales of its $99 media hub, it’s no where near popular.

But I believe Apple has a plan to change that. And when it figures out how to make every user’s TV set AirPlay-compatible, expect to see the Cupertino company make a hard push into the gaming industry. “Let’s talk gaming.”