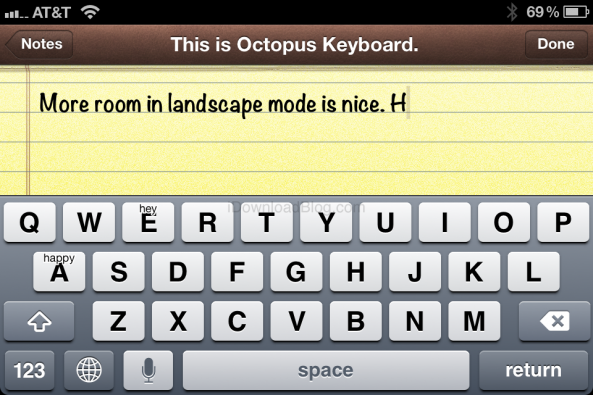 I may be in the minority, but I think RIM seems to be on the right track with their recently unveiled BlackBerry 10 operating system. There’s nothing in it exactly groundbreaking, but at least RIM appears to be building on a solid foundation for the future.

Whether or not BlackBerry 10 is enough to save the reeling company still remains to be seen, but at the very least it’s a good attempt by the Waterloo, Ontario based smartphone maker.

As a testament to how much better BlackBerry 10 is when compared to previous BlackBerry software, a jailbreak tweak has been created that actually emulates the functionality of a BlackBerry. Has that ever been done before?

Octopus Keyboard is an upcoming jailbreak tweak that seeks to bring RIM’s new gesture based predictive typing to iPhone users. The tweak is still in the early stages of development, but developer, Mario Hros, was kind enough to give me sneak peak of what he’s been concocting.

As you can see, it’s a pretty good iPhone implementation of RIM’s new-fangled predictive gesture based keyboard. It’s certainly not perfect, being this early in the developmental stages, but Hros has another week on his time table to get it working just as he envisions it.

As of now the Octopus keyboard can do the following:

Here are some of the remaining items that he wishes to accomplish before go-live:

Using Octopus Keyboard involves a small learning curve, but judging from my brief hands-on experience using it, getting mastery over it will probably take a bit of time. This isn’t a knock against the tweak, as I think it would take me some time to get use to RIM’s implementation as well. 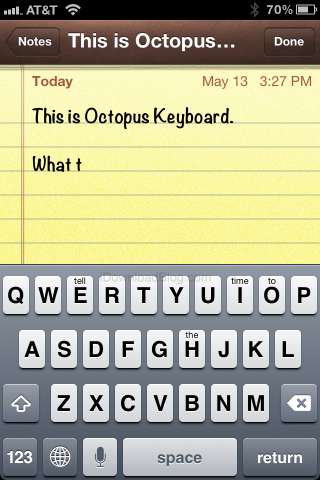 It’s still too early to tell if using the predictive gesture based text input will provide enough significant benefits to greatly improve typing efficiency, but I think RIM may be on to something here.

Honestly speaking, anything beats iOS’ pathetic excuse for predictive text input (aka autocorrect), so I’d be willing to invest the necessary time to get good at using Octopus Keyboard if the final product turns out as well as I think it may.

I should also mention that it’s still a bit too early to really derive many benefits due to some of the issues that the developer plans on squashing prior to release. The most obvious issue I encountered was with it learning incorrect words, and problems with capitalization. Again, these will be remedied upon release.

Actually using the tweak by swiping up on an individual key works surprisingly well. I was under the impression that the iPhone’s keyboard would simply be to small to accomodate a feature like this, but I rarely found myself making mistakes due to keyboard size and placement. I did find that using landscape input provided a bit more real estate that made some of the longer words fit on the keys better, but that too is an issue that Hros wishes to address before go time.

If you’re anxious to try Octopus Keyboard, you won’t have to wait much longer; it’s slated to hit Cydia on May 20th — a week from today. Regarding price or repo, there is still currently no information.

It’s kind of funny that we will be able to use this feature before your average BlackBerry user. Will you consider using it?